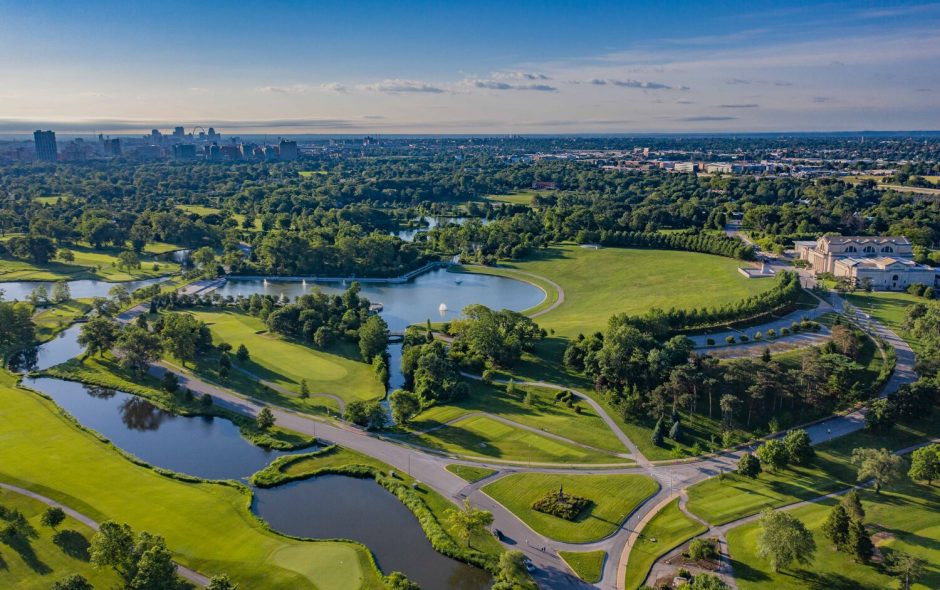 Summertime in St. Louis is no joke. While there are several activities happening throughout the summer months, and many sights to be seen, locals and visitors alike always take note of the sweltering heat and overpowering humidity.

Despite the often 90- to 100-degree weather, folks still find themselves outside, doing their best to be active and catch some rays. Many of them enjoy time in Forest Park, finding it the perfect place to participate in summer activities individually or with family and friends. Those who do come to the Park during the summer months may find something a bit surprising — the Park is actually cooler than the rest of the city!

Bringing on the heat

When thinking of any big city, we think of buildings, concrete jungles, busy streets and bustling sidewalks. One of the negatives of those big cities in the summertime is that it is easy for these places to become “heat islands,” meaning the city’s architecture absorbs heat and radiates it off into the environment because there is a lack of greenery.

“Things like asphalt on parking lots and glass on buildings absorb and reflect radiation,” says Roman Fox, Superintendent of Horticulture at Forest Park Forever. “This means that they are constantly heating up the environment around them causing the heat island effect.”

Fox manages the Horticulture team that plants and maintains 150 flower beds in Forest Park with the help of a valued partnership with the City of St. Louis Parks, Recreation & Forestry Department.  Together, they care for about 490 of the 1,300 acres of the Park with their main focus being on landscaping and young tree development. In 2020, his team planted over 400 new trees in Forest Park.  In his four years at Forest Park and many years studying all things green, Fox has come to understand why the Park can be an oasis during the summer.

“From a scientific standpoint, trees take the sun’s radiation and absorb and convert it to chemical energy,” says Fox. “The fact that trees absorb radiation is amazing for us because that means less heat is being reflected off buildings or absorbed by roads. This impacts the reduction of heat of a surrounding area and keeping away that overall heat island effect.”

With trees converting the sun’s radiation, it’s no wonder that St. Louis’ largest urban park plays a role in keeping the city cool. Fox and team take pride in knowing that the number of trees in Forest Park is a major factor in combating extreme heat. There are an estimated 45,000 trees in Forest Park.

And while cooling the city down is probably the aspect the St. Louis region is most thankful for (at least during the summer months), trees also have a positive effect on air quality.

“A lot of folks don’t know that trees also act as big filters,” says Fox. “Besides heat, they absorb several things that could be in our air, from toxins to minerals that we don’t want to reach high levels. They also help with water quality by managing, holding and protecting soil to prevent degradation and erosion.”

The number of trees in Forest Park plays a huge role in keeping the heat down in the city and providing sustainable air quality. One could only imaging how hot St. Louis could be without the greenery of Forest Park absorbing and converting energy. On second thought, let’s not imagine that…it’s already hot enough!