In 1950, a glass-walled house, now nestled amid flowering trees here, spent a few months in Manhattan. Skyscrapers loomed over its flat roof while it was on exhibit in the Museum of Modern Art’s garden. The installation, designed by the architect Gregory Ain and co-sponsored with Woman’s Home Companion magazine, was meant to inspire creativity on a budget for residential subdivisions.

According to the museum’s brochure, a system of movable walls “conveys an illusion of spaciousness” in the two-bedroom building. Its flexibility and expansive windows offered “a view — to the future,” as the magazine noted in an eight-page color feature.

But once the attraction was shuttered and dismantled, its fate fell into obscurity. It seemed to have disappeared.

A few months ago, however, George Smart, a historian who founded and runs USModernist, a nonprofit in Durham, N.C., which focuses on mid-20th-century modernist homes, pored through MoMA’s archives. He discovered that the building had survived and identified the owners, sharing this information with The New York Times.

“I could not believe that the most famous house in New York in 1950 would simply vanish,” he said.

This spring, when The Times contacted the owners, they were surprised to learn that scholars had been pursuing their home. Mary Kelly, a retired New York City Transit Authority executive, bought the property in 1979 with her husband, Ralph (who died in 2013), and she lives there now with three adult sons. Soon after the family had moved in, neighbors told them the building had been born at MoMA. Mary Kelly then alerted the museum, but apparently, no records of her calls were kept.

“I knew that it was a famous house,” she said. “This house was not lost. It’s been here all this time.”

Amanda Hicks, a spokeswoman for MoMA, said that the museum is delighted by the Croton-on-Hudson finding and noted that its archival files are becoming more searchable. Research, she added, is “an iterative and revelatory process.”

Ain, who died in 1988, collaborated on the house with his colleagues Alfred Day and Joseph Johnson and with museum staff members, including Philip Johnson and Natalie Hoyt. (The team’s original 51.5-inch model of the house, which surfaced a few years ago, has returned to MoMA.)

The furnishings were practical, mass-produced pieces, by prominent figures like Charles and Ray Eames. Hanging on the walnut walls were paintings and prints by Georges Braque, René Magritte, and Edward Hopper. Light bulbs were tucked into ceiling coves. Woman’s Home Companion described the interior as an ideal setting “for the odds and ends of family living that are bound to turn up in any happy home.”

Cornelia Cotton, a nonagenarian in Croton-on-Hudson who is a writer and gallery owner, remembers touring the Ain house at MoMA (entry tickets were 50 cents). “It was very plain, it was very simple and affordable and appealing,” she said.

For Ain, the commission did not amount to much of a professional springboard. His daughter, Emily Ain, said he was “extremely modest” and not a self-promoter. Based in Los Angeles, he did gain recognition during his career for designing unpretentious, sunny dwellings with changeable floor plans.

“He wanted to solve problems for ordinary working people,” said Anthony Denzer, a professor at the University of Wyoming. Progressive activism, including support for desegregation, and interest in Soviet architecture helped land Ain on the F.B.I.’s Communist Security Index of “‘dangerous,’ subversive individuals,” Denzer writes in an essay in the forthcoming book “Gregory Ain and the Construction of a Social Landscape.”

Smart found correspondence showing that MoMA had auctioned off the house’s components to Isidore Skol, a periodontic technician, and his wife, Marcella Skol, a schoolteacher. Marcella’s father, Hyman Fleischman, a building restorer, disassembled the house in the museum garden and then stored the parts for a while in an airplane hangar until reassembly began on the Croton property.

The Skols’ daughter, Sondra Skol Bell, said her family “felt just so fortunate” to own what was known as “the museum house.” With Smart uncovering her family’s role in the house’s journey, she said, “I’m glad the mystery is solved.”

(A previous MoMA garden building, designed by Marcel Breuer, had been shipped to Tarrytown, N.Y., where it has been preserved. The Ain house’s successor, in Japanese style, was turned into a museum in Philadelphia.)

In 1969, the Skols sold the house to owners who neglected the gardens, did not clean up after their two dozen cats, and had a taste for purple woodwork and green carpet. A decade later, when the Kellys went house hunting, they recognized the property’s potential. “As soon as I saw the house, I said, ‘This is it.’ I said, ‘Go no further,’” Mary Kelly said.

Since her childhood in Yonkers, Kelly added, she had dreamed of living in the kind of glamorous, transparent modernist homes she had seen in movies. In a mostly glass house, she said, “You don’t feel closed into anything.”

A local historian, Jane Northshield, would occasionally stop by to take photographs. But somehow word never reached MoMA’s circles that the Ain house was safe.

The Kellys have preserved the interior walnut planes, cove lighting, and most of the room configurations. They added reinforced window glass, skylights, pink carpet, crystal chandeliers, and stained-glass lamps. Walls are covered in paintings and prints, whether reproductions of Impressionist masterpieces or folk art portraits, alongside family photos.

“I just like art, I’ve got all kinds of art, I don’t care what it is,” Kelly said. Knickknacks on the shelves include creamy ceramic vessels that her sons made as children and souvenirs of vacations nationwide — the very kind of “odds and ends of family living” that Woman’s Home Companion had envisioned.

A coating of sparkly green stucco on MoMA’s wooden exterior “makes it maintenance-free,” Shaun Kelly, the eldest son, said. He and his brother Scott are retired from the Postal Service and the New York City Transit Authority, respectively; a third brother, Parrish, works as a dietary aide at a nearby nursing home. (A fourth brother, Kryss, died in 2013.)

The property’s 2.7 acres are lush with unusual trees, such as Japanese snowbell and weeping huckleberry. “If it doesn’t give me a flower, it can’t come here,” Mary Kelly said. Neoclassical stone statues, vintage subway signs, and metal filigree benches are scattered around the grounds. Mowing the undulating lawn takes about four hours.

Other researchers who have been on the trail are the filmmaker Christiane Robbins and the architect Katherine Lambert, both in California, who have created an installation about the house and Ain. They plan to interview the Kellys for their forthcoming documentary, “No Place Like Utopia.” The Covid-19 outbreak had interrupted their own digging.

For everyone who visits, Mary Kelly said, the property resonates: “They want to tour this place. They know it’s different. They’re always curious.” But she recognizes, she added, that future owners may customize it completely differently.

“You’d be surprised,” she said, “how people change things.” 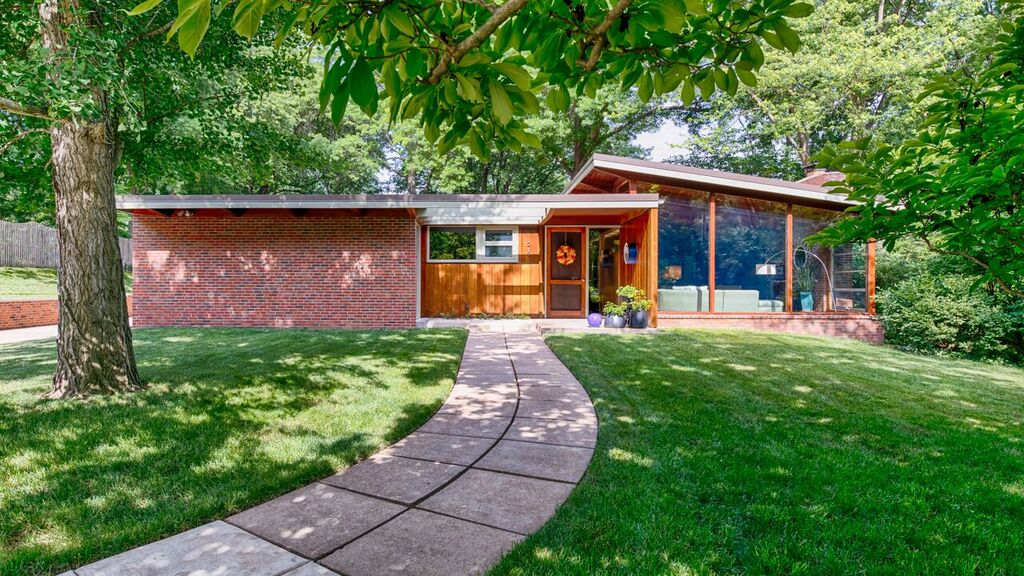