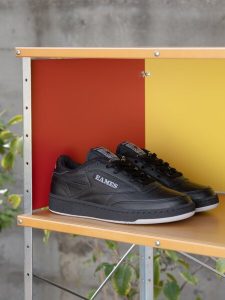 After teasing the internet with an Eames House–inspired sneaker made exclusively for “friends and family” last month, Reebok and Eames Office have officially announced a landmark collaboration honoring the life and creative legacy of Charles and Ray Eames. The inaugural drop of the Reebok x Eames Office Club C shoe collection will be available this October 15, with a wider global release on October 21.

Known for their groundbreaking furniture creations for Herman Miller and Vitra, Charles and Ray Eames redefined postwar American design with their playful, yet purposeful sensibility. The celebrated 20th-century designers were driven by the belief that everyday objects should go beyond utilitarian function to enrich people’s lives on a personal level. Today, Eames Office—which was established by the husband-and-wife duo in the mid-20th century—is run by the third generation of the Eames family.

A second collection from the collaboration—the Ray Eames Signature Pack—will drop later this season. The collection is devoted to the artistic triumphs of Ray Eames and will feature a reproduction of her painting Composition (1939), as well as the iconic Eames dot pattern textile print from 1947.