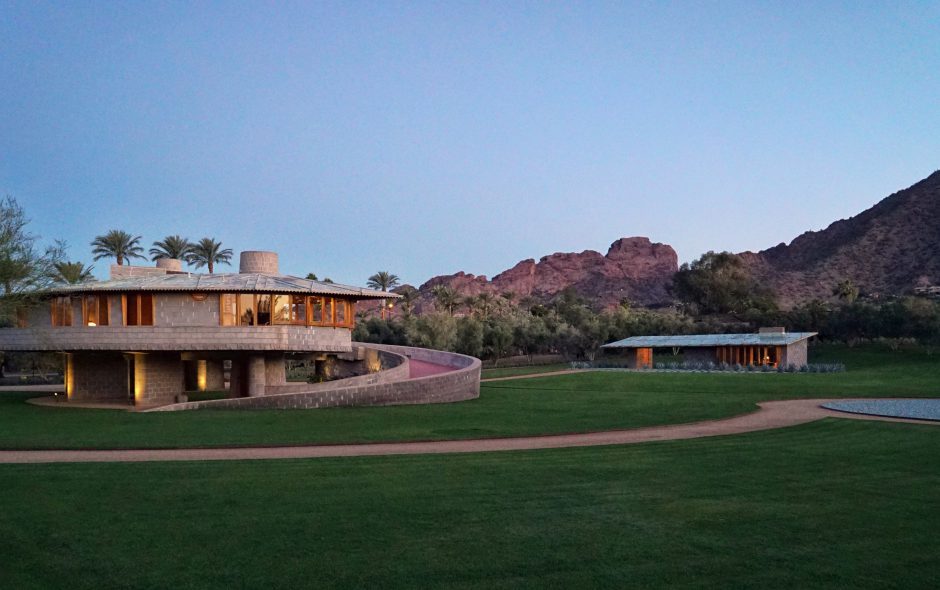 Frank Lloyd Wright’s influence on the architectural world is far-reaching, to put it mildly, and this year a considerable number of his iconic homes have either come to market or found new owners. Though Wright is perhaps best known for his public works, like the Solomon R. Guggenheim Museum in Manhattan, “Wright has about 400 remaining buildings left, and about two-thirds of them are private, single-family homes,” Barbara Gordon, executive director of the Frank Lloyd Wright Conservancy, previously told Architectural Digest.

This year, homes like Wright’s iconic spiral-shaped David and Gladys Wright House, in Phoenix, and his lesser-known but equally stunning Foster House, in Chicago, join the likes of the hexagonal Stuart Richardson House, in Glen Ridge, New Jersey, the Thaxton House, in Houston, and more, which all came to market in 2019 and are still up for grabs. Below, we’ve rounded up seven Wright-designed residences that are currently seeking or have recently found new owners to care for and preserve Wright’s legacy for the next generation of architecture enthusiasts.

Foster House and Stable, Chicago
Sold in August for an unknown amount 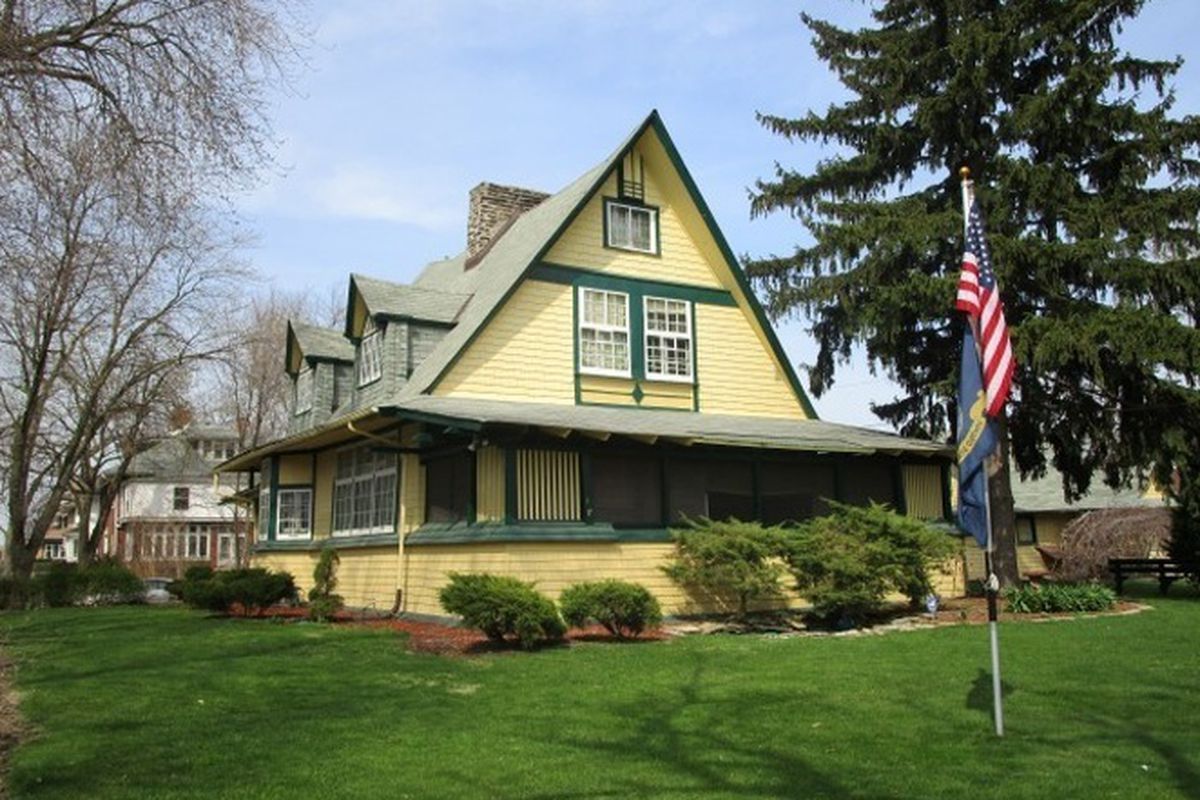 In February, one of Wright’s earliest designs hit the market for a surprisingly affordable $175,000. The five-bedroom, three-bathroom house was originally built in 1900 for the Foster family as a summer retreat on the South Side of Chicago and was declared a  landmark in 1996. The yellow wood-paneled dwelling has a forest green trim, and was designed to mimic a traditional Japanese style, with a distinctive “dramatic, outward flare of the ridges on the roof and dormers,” according to the Frank Lloyd Wright Trust in Chicago. The home measures 2,408 square feet and includes a spacious front porch, a horse stable, and a chicken coop out back. It sold in August after a price cut that lowered the asking price down to $135,000. 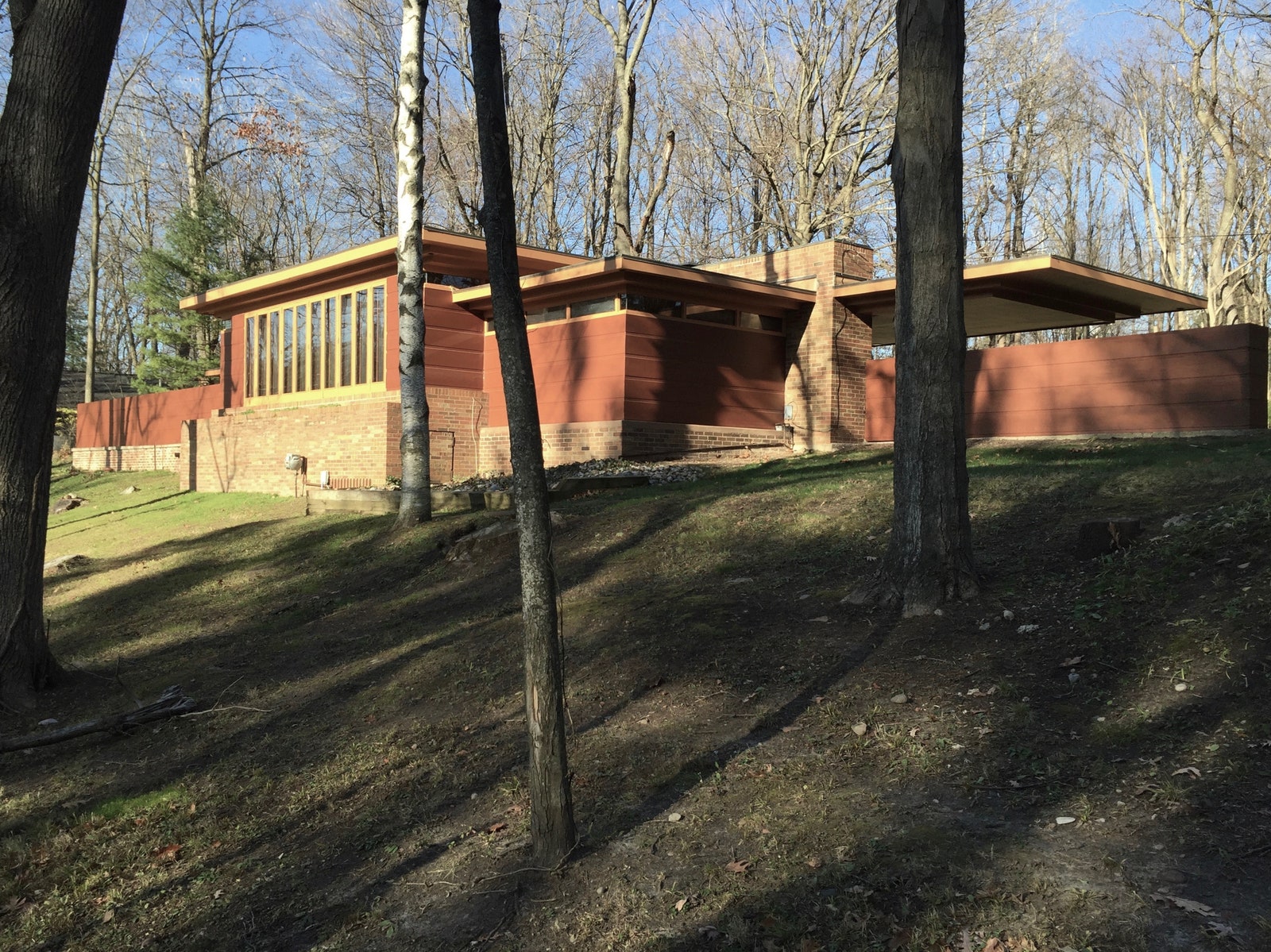 Many of Wright’s single-family home designs were situated in small towns scattered across the U.S. His Goetsch-Winckler Home is just one of four houses he designed in the Lansing area of Michigan, and according to sellers Audrey and Dan Seidman, it was the architect’s “favorite small house.” Completed in 1940, the one-story house features red brick walls and concrete floors, with plenty of telltale Wright features, like a cantilevering roof, horizontal planes, and plenty of strategically placed windows throughout to allow inhabitants to feel one with nature. The 1,400-square-foot Goetsch-Winckler Home is considered Wright’s second Usonian design, and is as practical as it is aesthetically pleasing: A brick fireplace that juts into the middle of the large, open common space has a dining table attached to it, and an alcove on the other side of the fireplace features built-ins that align perfectly with the house’s wood paneling. It was listed for $479,000 in May and sold for an undisclosed amount in August. 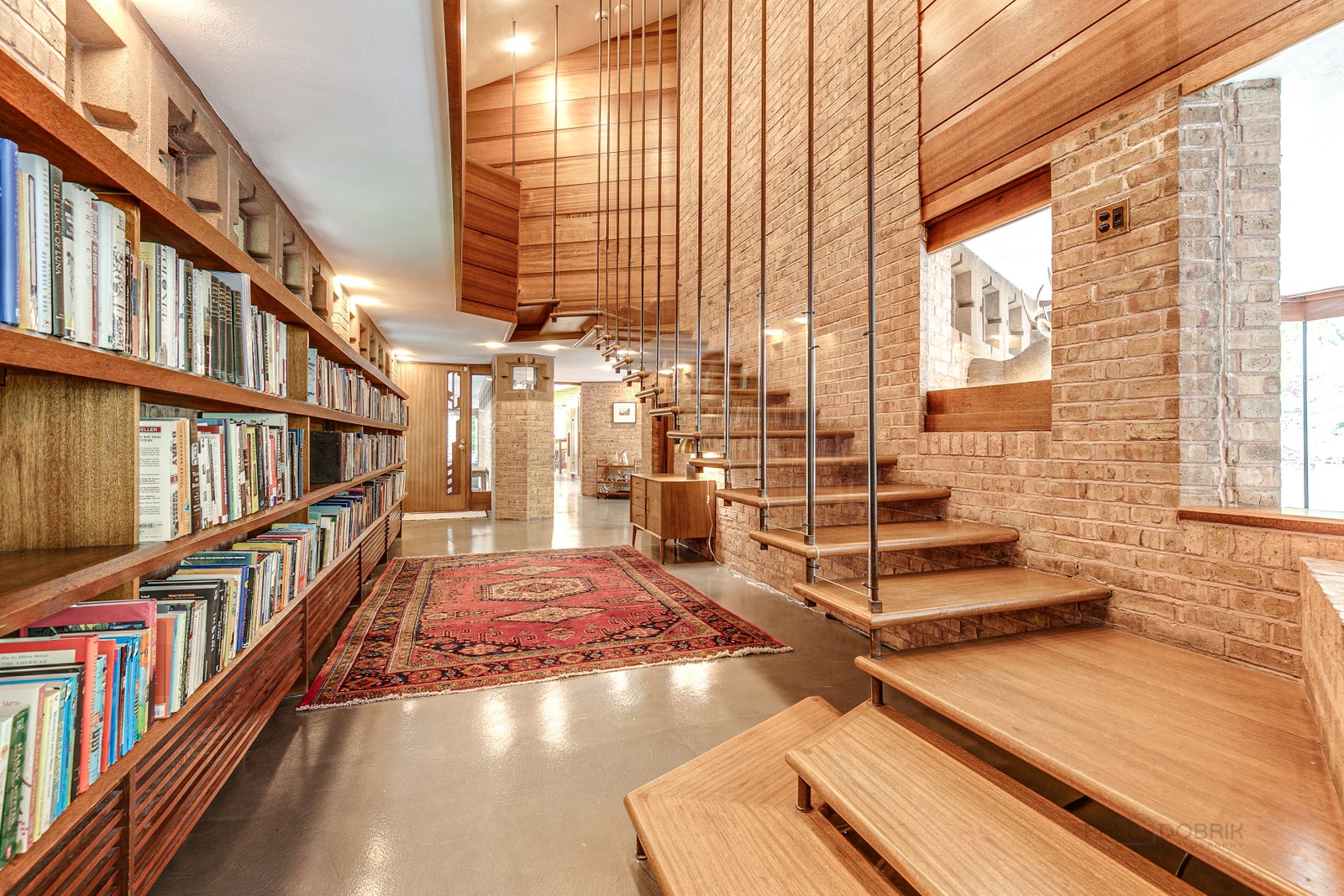 When Wright designed the Charles F. Glore House for the investment banker in 1954, it was the architect’s only commission in Lake Forest, a wealthy suburb situated about 45 minutes north of downtown Chicago. Earlier this year, it was listed for $2.275 million. The four-bedroom, four-bathroom home is perhaps most notable for its living room, which features dramatic double-height cathedral windows that take in stunning views of the leafy backyard. Many of the other rooms are also lined with floor-to-ceiling windows, including the dining room, which, like much of the rest of the house, has concrete floors and brick walls. Clerestory windows in the galley kitchen add light to the space. The 4,300-square-foot house also features four fireplaces, three of which are cantilevered.

Charles and Dorothy Manson House, Wausau, Wisconsin
Listed at $224,200 before being taken off the market

Wright’s Usonians are notoriously plentiful in the Midwest, and one in particular came to market in June for $425,000. Located in the small town of Wausau, Wisconsin, the one-story Charles and Dorothy Manson House is perched on a sloped 0.58-acre lot, and features a number of 30- and 60-degree angles built into its exterior walls and in the ceiling to accommodate for the unusual topography. As a result, many of the common living spaces are uniquely shaped. The four-bedroom, three-bathroom house carries many of Wright’s trademark designs, like a broad, horizontal roof; clerestory lighting; and long hallways. Red tidewater cypress from the area was used on the ceilings and walls in a board-and-batten pattern, giving an almost uniformly red glow to the 2,462-square-foot house. According to Curbed.com, the property, which was completed in 1941, has been lightly updated in recent years, with a remodeled kitchen, a rubber-roofing system, and two restored fireplaces. Its asking price dropped to $224,200 in September before it was taken off the market. 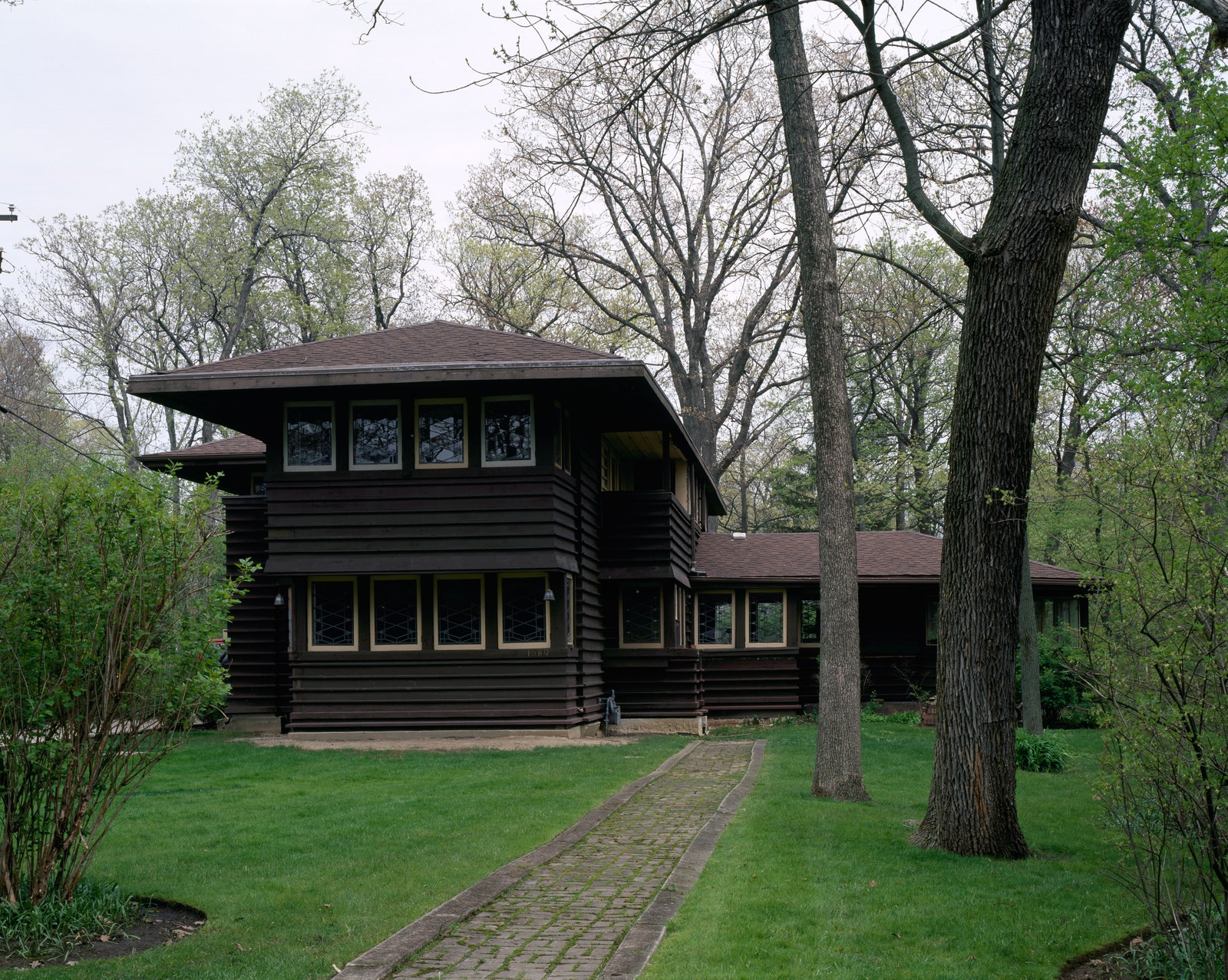 Fans of Wright’s work are willing to go to great lengths to preserve his legacy, and the sale of the Alice and George Madison Millard House in August is a perfect example of this. The 114-year-old home was bought by a local couple, Gale and Rickey Rothner, in December 2015, after plans were already in place to demolish the property, which had been on the market for more than four years. “They were at the point of tearing it down — and that’s the point at which I got involved,” Gale told JUF News in 2019. The couple made extensive updates to the 3,061-square-foot, four-bedroom, four-and-a-half-bathroom dwelling, including a new garage, a finished cellar, a converted main suite, and additional storage. The renovations took three years, and in the end, the Rothners donated the house to the Jewish Federation of Metropolitan Chicago. It was listed in July for $950,000 and sold in August for the full asking price 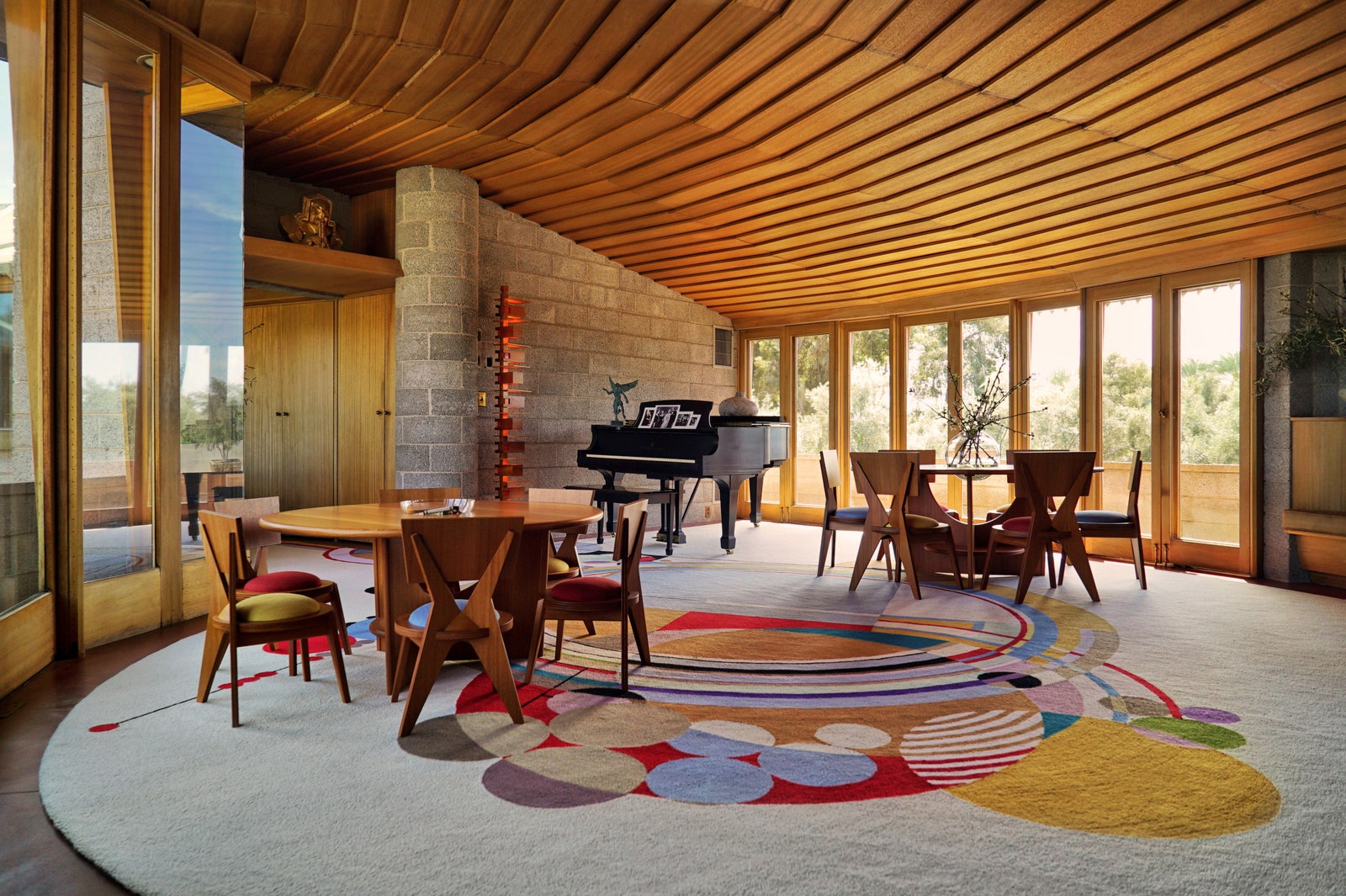 One of Wright’s most iconic designs, the spiral David and Gladys Wright House sold for $7.25 million in August, a huge relief to preservationists who had watched as previous buyers pitched plans to tear down the unique structure to build something in its place. Built in the 1950s for Wright’s son David and his daughter-in-law Gladys, the uniquely configured property includes a round main house and a separate 360-square-foot guest house situated on the far end of the six-acre lot. The David and Gladys Wright House features three bedrooms and four bathrooms, and uses almost no straight lines; the pathway to the main entrance, for instance, is a curved ramp as opposed to a set of stairs. Inside, the living room is circular, and the stone fireplace is rounded as well. The kitchen features a large circular window and curved countertops. 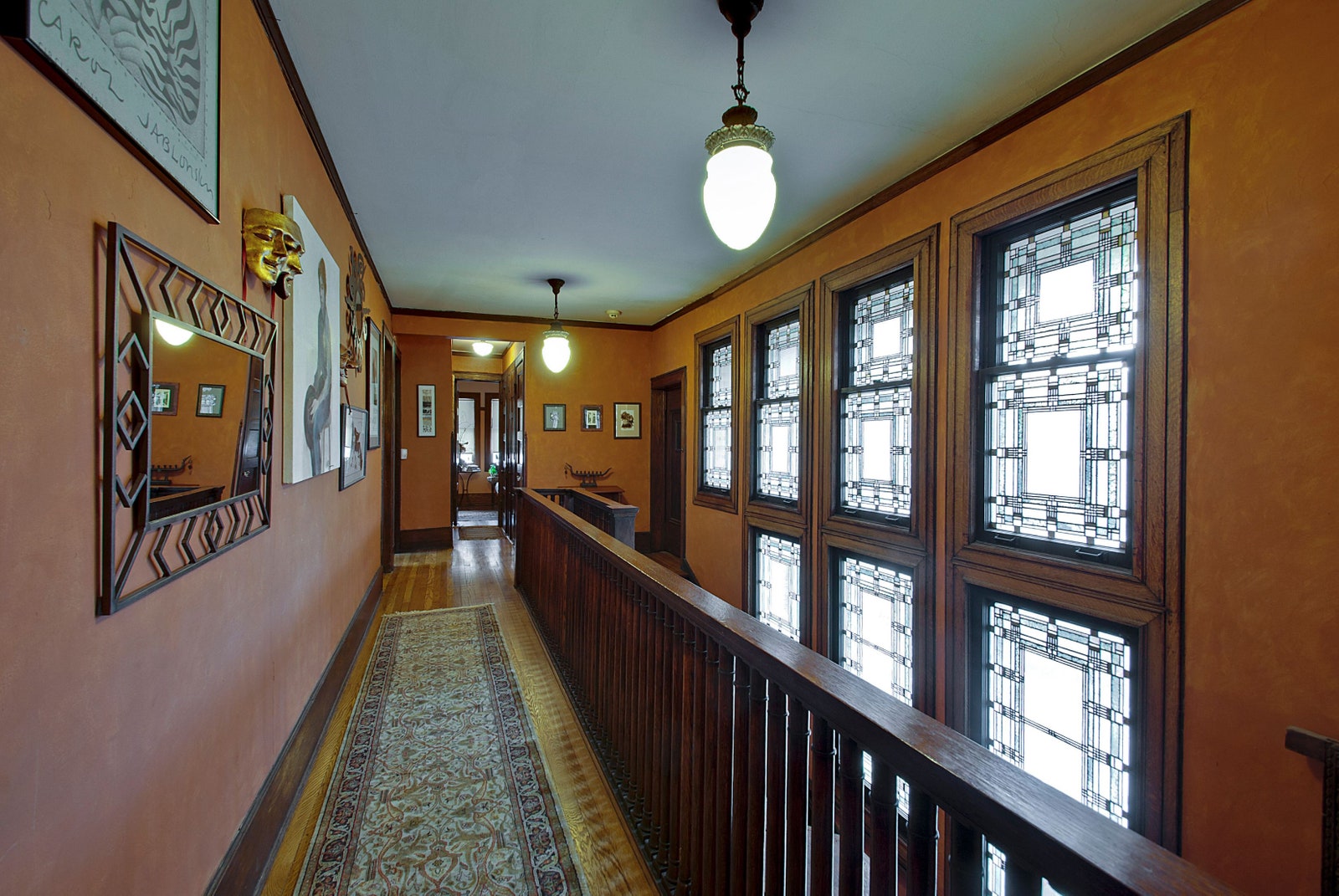 Though it’s been on the market before, the Isidore H. Heller House was listed once again in August, this time for $2.2 million. The house, which was completed in 1897, is notable in that it reflects a transitionary period in Wright’s design career, from his more traditional Prairie style to the Arts and Crafts style that began to take hold in the late part of the 1800s and the early part of the 1900s. The Heller House stands four stories tall, with an elevator connecting all four floors, and features a total of seven bedrooms. According to the Frank Lloyd Wright Foundation, the exterior is a mixture of yellow Roman brick and Indiana limestone. Leaded glass windows, a Wright trademark, feature prominently throughout the home, and the glasswork was designed by Marion Mahony, the first licensed female architect in the United States.