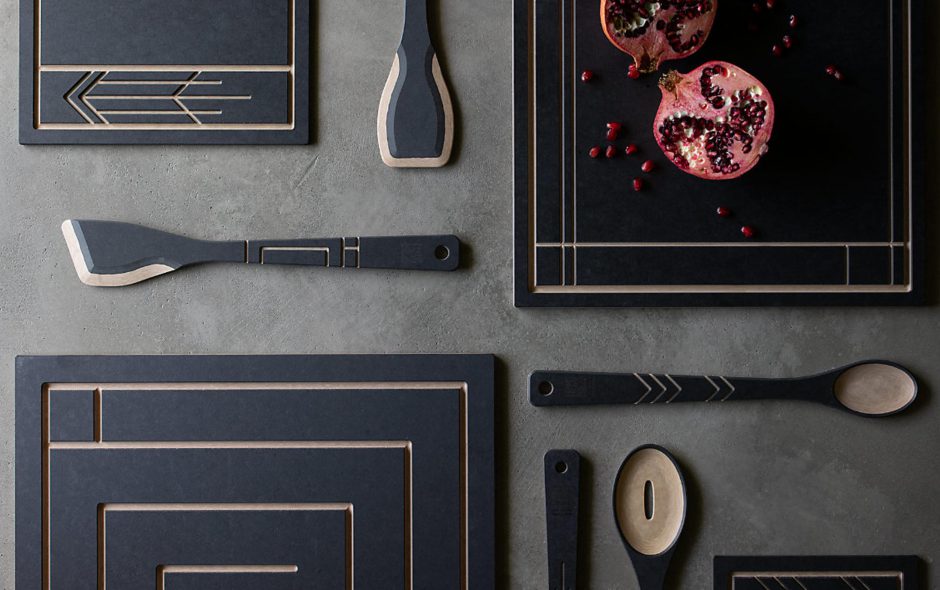 Article written by Warren Shoulberg for Business of Home

Frank Lloyd Wright died more than half a century ago, but his place in the design world may be reaching heights he never saw in his own lifetime. From fine furniture to a new line of children’s furnishings and a just-introduced collection of tabletop products for Crate & Barrel, the legendary architect—arguably the first-ever “starchitect”—seems to be everywhere these days.

Though Wright is best known for his iconic buildings—Pennsylvania’s Fallingwater is perhaps the most famous house ever built; New York’s Guggenheim Museum is his most iconic creation—he also designed furnishings, usually for the homes, offices, and other structures he was building. Many of these products ended up being licensed and sold into the home furnishings market over the years (Henredon once had an authorized line of Wright furniture; one of the longest-running collections of fine Wright furniture was from Vermont-based Copeland Furniture, which made an assortment of licensed products derived primarily from the Herman T. Mossberg Residence in Indiana), but the pace has accelerated in recent years. Wright’s classic designs—combining arts and crafts with contemporary motifs, often accented with hints of Native American or Asian influences—have stayed relevant to generations of homeowners.

The newest products are part of a 10-piece collaboration between Epicurean and the Frank Lloyd Wright Foundation, now being introduced exclusively at Crate & Barrel. The line includes serving utensils and cutting boards that, according to the brand’s announcement, “have the warm look and feel of wood with the durability of Richlite, a resin-saturated recycled paper that won’t warp, chip or crack.” The collection, with prices ranging from $15.95 to $79.95, is the first time Wright designs have been used for kitchenware products like these.

Earlier this year, Wright’s oeuvre entered another new category: children’s furniture. Flagstaff, Arizona–based Mod Mom Furniture and Denver-based toddler furniture brand Little Colorado partnered to introduce a collection under the name Frank Lloyd Wright PlayHouse—a mix of modern pieces that riff on the architect’s designs and scaled-down replicas of his furniture—which is now available on the two companies’ websites. The first piece in the line is the Usonian play table and chair set, in Baltic birch plywood with two chairs and five tabletop options, including an illustration of Wright’s colorful March Balloons motif. Pricing for the table and two chairs is $495. More pieces are expected to be added, including a kid-size version of Wright’s classic Origami chair.

Also new this year is an adult furniture line from direct-to-consumer brand Inside Weather. The Usonia collection (named after Usonian, a Wright-invented word derived from “of the United States of North America” to identify designs meant to be mass-produced at affordable prices) is based on original Wright designs that the company adapted for modern usage. Unlike its namesake, the pieces are being produced in limited quantities and include individual tables and chairs. Prices are quite reasonable, however, with a small side table retailing for $174 and an armless lounge chair starting at $558, both with an introductory promotional price. All the pieces are made in California and need to be assembled by the consumer.

These new products mark a major return to the marketplace for Wright designs, which have been periodically reproduced over the years. Online luxury marketplace 1stdibs currently offers nearly 100 different Wright pieces for sale, ranging from textiles and lighting all the way up to a $45,000 desk from Oklahoma’s 19-story Price Tower, one of only two of the architect’s skyscraper designs that were realized, and the only one that survives today.

The foundation sells a wide range of licensed products besides furnishings, ranging from pens and watches to apparel and Christmas ornaments, and museum gift shops around the country often feature Wright products.

While Wright fell out of favor midway through his career and often took minor commissions to pay the bills, he achieved late-in-life stature after Fallingwater and when the Guggenheim opened in 1959. That came too late for him—he died six months before the museum opened—but his legacy has only gotten larger since. Every year, there is invariably an exhibition or museum show on Wright—including a current one called “Wright Before the ‘Lloyd’” at the Elmhurst Art Museum outside of Chicago—and his design influence is evident today in everything from the modern suburban ranch house to any number of furniture pieces derived from his originals.

Now, shoppers wanting the real thing have more options than ever to do the Wright thing.