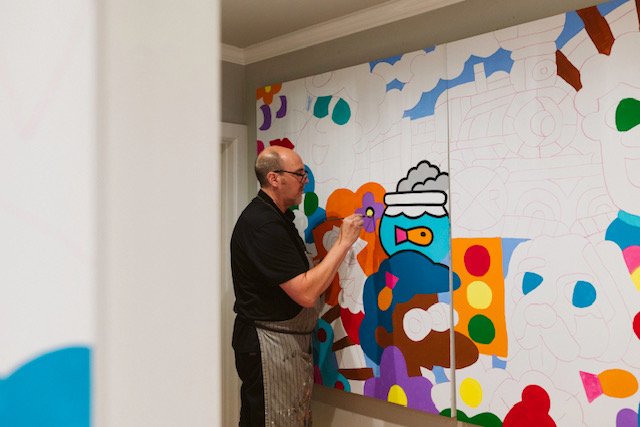 The Foundry Art Centre is excited to announce the unveiling of the second annual Grand Hall Mural Project, featuring Joy Ride, a three-part mural by St. Louis artist Charles Houska. The Grand Hall Mural Project, begun in 2021, is an exhibition program featuring original, commissioned work by professional artists installed in the Foundry Art Centre’s Grand Hall. As with all of the Foundry’s arts and exhibitions programs, the project places a special emphasis on the extraordinary talent of our region’s artists.

Asked to create work for the Grand Hall Mural Project, Houska drew inspiration from the Foundry’s history as a train car factory, St. Charles’ historical figures, as well as Houska’s famous cast of characters. These site-specific works will be a major focal point for the Foundry throughout the year, serving as an important and vibrant backdrop for the Foundry’s next year of programming and events – everything from weddings to corporate dinners, Summer Art Camp to First Fridays. Titled Joy Ride, the murals will set the tone for an artful year.

Famed St. Louis artist and gallerist Charles Houska (pronounced House-ka) has been creating his signature Pop-inspired artworks for over 25 years. Born and raised in Springfield, Illinois, Houska earned a degree in art & visual communication from Illinois State University. After working as a graphic designer in Chicago for several years, he learned that his art connected with people and he set out to transition to a career as a full-time artist, ultimately landing in St. Louis and opening Houska Gallery, his studio/gallery in the Central West End.

In addition to his acrylic on canvas paintings, Houska produces murals and billboards, and his art has appeared in a variety of forms, from credit cards to city mass transit buses to even an Illinois license plate. Major corporations have commissioned Houska to create artwork for their specific needs including St. Louis Metro, St. Louis Children’s Hospital, Herman Miller HQ, Absolut Vodka, and BoS Bank of Springfield. Perhaps one of Houska’s favorite projects is his work with school-age children through a program he calls Houskaballoo, in which he collaborates with students on mural projects in their schools. Houska involves himself with charitable organizations, especially those dealing with animals such as PAWS, Stray Rescue of St. Louis, and The Humane Society.

Joy Ride is made possible with the generous support of Ted Wight with Dielmann Sotheby’s International Realty.

Please join the Foundry for the unveiling of Joy Ride on Friday, September 2nd, from 5-8pm. For more information, please visit foundryartcentre.org or email Jessica Mannisi, art and exhibitions, at [email protected].

About the Foundry Art Centre
As a vibrant home to the arts, the Foundry Art Centre raises awareness and appreciation of the arts throughout the region. Alive with activity, the Centre’s programming reinforces the importance of the arts and helps ensure that arts and culture remain vital. Artists, patrons, young people and the community at large continually find new ways to interact at this unique facility. 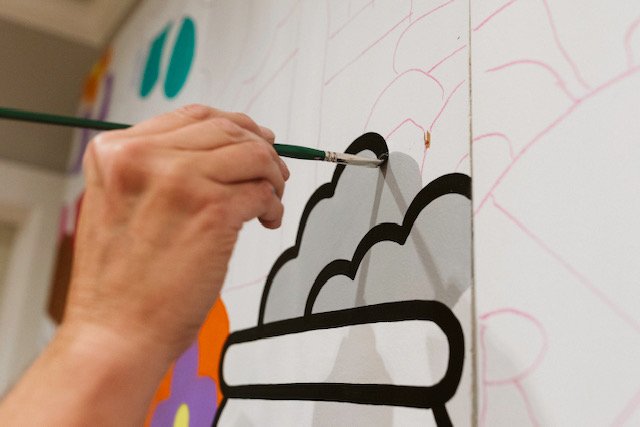