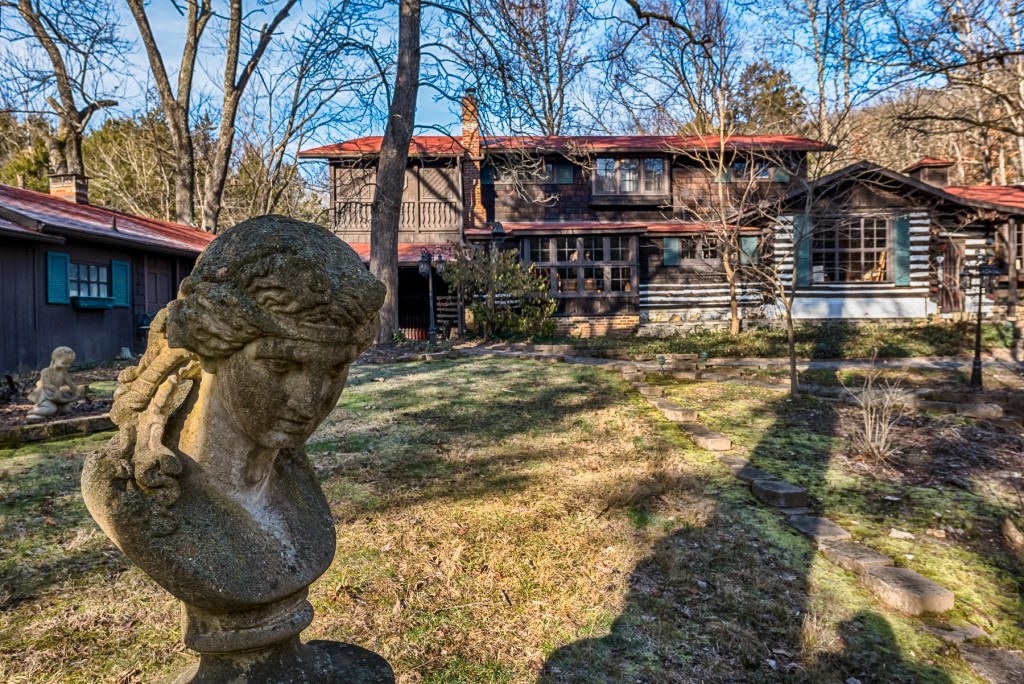 Prides Crossing, there is more than what meets the eye.

At the beginning of this year I was given the opportunity to list a home that is so much more than just a place to stay. This home embodies decades of history and is surely one of the most unique homes I have ever had the chance to represent. In 1988, the St Louis Post Dispatch ran an article on the two men that transformed a once small log cabin into a truly fascinating home. Go ahead and read below, you won’t be disappointed. While much of the home as remained the same, the current owner has done many things to modernize the home without changing the design. It now also features a detached guest house, in-ground pool, “movie” room, new HVAC system, a sauna and more. Here is the original post from when it just went on the market. There you can view the homes website and see more photos if you’d like! 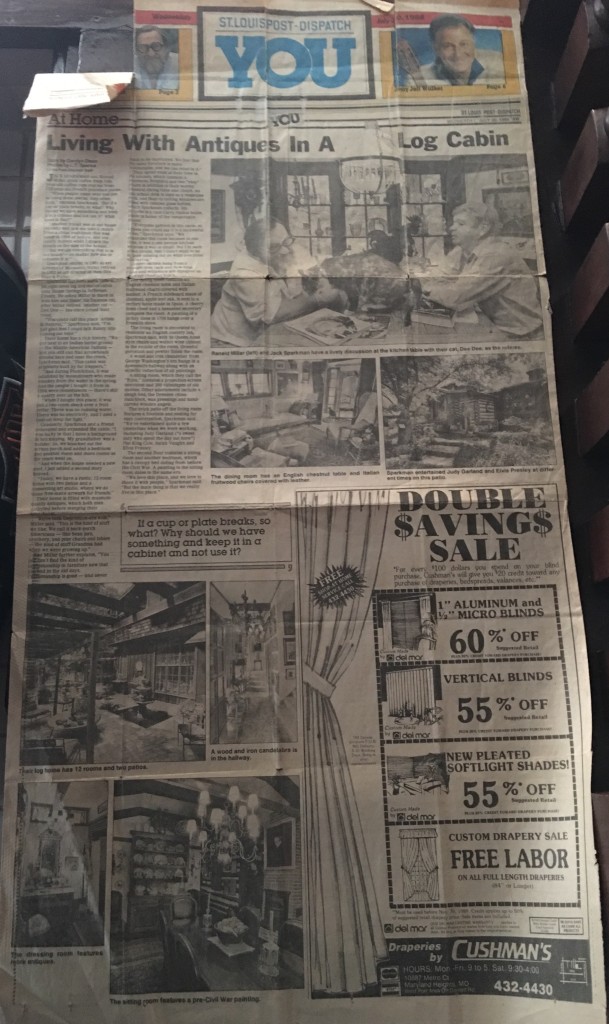 The following is from the St. Louis Post Dispatch published in 1988 by Carolyn Olson

“When people come over and see us using these pieces, they often gasp,” explains Sparkman. “But if a cup or plate breaks, so what? Why should we have something and keep it in a cabinet and not use it? What good is that?”

“Another friend was at our house recently and saw me take a match from a chine matchbox that was made in 1800 or before, and she nearly fainted when I struck the match on the side of the holder.”

“But we use everything that is in our house-no matter how old or valuable it is.”

Sparkman has lived in an eight-room log and stucco cabin near House Springs in Jefferson County. He asked Miller to move in with him and Sister, his Siamese cat, after miller retired. Another cat – Dee Dee – has since joined their rose.

“You could call this place ‘Artists in Retreat'” Sparkman said. “I’m just glad that I could talk Ranny into coming out here.”

Their home has a rich history. “We are next to an Indian burial ground – the Middle American Indians – and you still can find arrowheads around here and near the creek,” Sparkman said. “The cabin was originally build by fur trappers.”

“And during Prohibition, it was inhabited by moonshiners who made whiskey from the water in the spring. And the people I bought it from in 1950 were stonemasons – theres still a quarry over on the hill.”

“When I bought this place, it was just a two-room shack over a fruit cellar. There was no running water. There was no electricity, and I used a coal-oil lamp for light.”

Gradually, Sparkman and a friend renovated and expanded the cabin. “I was lucky in that I have a background in bricklaying. My grandfather was a builder. So, we knocked out the screen porch and added a bedroom and another room and more rooms as the years went on.”

“And when the house needed a new roof, I just added a second story instead.”

“Today, we have a rustic, 12-room home with two patios, and a connecting art studio, where we do some free-lance artwork for friends.”

Their home is filled with museum-quality antiques, which both men collected before merging their households.

“We’re both Depression-era kids,” Miller said. “This is the kind of stuff we like. We call it back-porch Americana – like bean jars, crockery, and pine chairs and tables – the kind of stuff Grandma had when we were growing up.”

And Miller further explains, “You just can’t find the kind of craftsmanship in furniture now that you had in the old days. Craftsmanship is gone – and never again to be duplicated. We find that the older furniture is more comfortable, and we can relax in it.”

They spend most of their time in the kitchen, which contains a television, fireplace and two “easy” chairs in addition to their wormy chestnut dining table and chairs. An oak school desk is used as a magazine rack, and floor-to ceiling windows are filled with colored glass bottles, which Sparkman collects. His favorite is a rare Carry Nation bottle, made in honor of the temperance leaders.

“Everyone gathers in this room, so I guess you could say it is a successful room,” Sparkman says. “We expanded this room because at one time, it was a one-person kitchen because it was so small. But I’m such a bon vivant, that I didn’t want to be in here missing out on what everyone was saying.”

Copper skillets hang from a wrought-iron rack and flow-blue china and willow are are displayed on a wormy chestnut hutch.

The dining room contains an English chestnut table and Italian fruitwood chairs covered with leather. A French  sideboard made of chestnut, apple and oak, is next to a rectory table made in Spain. A cherry linen chest and a bonneted secretary complete the room. A painting of a jockey done in 1700 hangs over a Franklin stove.

The living room is decorated to resemble and English country inn, Parkman said, with its Queen Anne style chairs and walnut wine cabinet in the middle of the room. Oriental porcelain and pewter finish the room.

A wood and iron chandelier from George Washington’s era hands in a downstairs hallway along with an eclectic collection of oil paintings.

A sitting room, which they call the “Bijou,” contains a projection-screen television and 300 videotapes of old movies. Other adornments include a sleigh bed, the Dresden china matchbox, wax pressings and hand-carved wooden angels.

The brick patio off the living room features a fountain and seating for easy conversation, Sparkman said. “We’ve entertained quite a few celebrities when we were working, including Judy Garland (“a sweet lady who spent the night out here”) Nat King Cole, Sarah Vaughn and Elvis Presley.

The second floor contains a sitting room and another bedroom, which has a canopy bed dating from before the Civil War. A painting in the sitting room dates to the same era.

“We love this place,a nd we love to share it with people,” Sparkman said. “But the main thing is that we really live in this place.”

What could be better than @plantershouse My son’s and my favorite place to go together. – from stlouis.style on Instagram
February 15, 2018
My House is Under Contract!
June 10, 2012
Summer Garden
June 5, 2016

4 thoughts on “Pride’s Crossing- article on the previous owners. A home rich in history!”