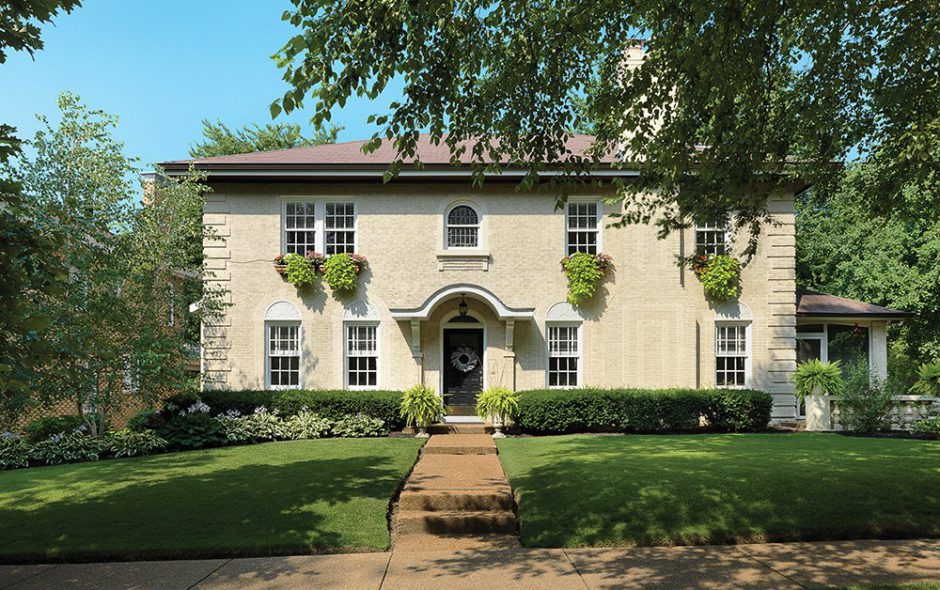 How do you define a beautiful home? Is it in the architecture or the setting? In the mix of building materials or the assemblage of stylistic influences? It wasn’t until our search for beautiful homes ended this past summer that writer Amy Burger and I recognized how our instincts drew us to properties with incredible landscaping and gardens, to places where homeowners place a premium on outdoor spaces and details: window boxes in bloom, statement-making walkways, a passion for the front porch, which, this year above all others, proved its hero status as the place to connect with neighbors and nature alike. —Veronica Theodoro 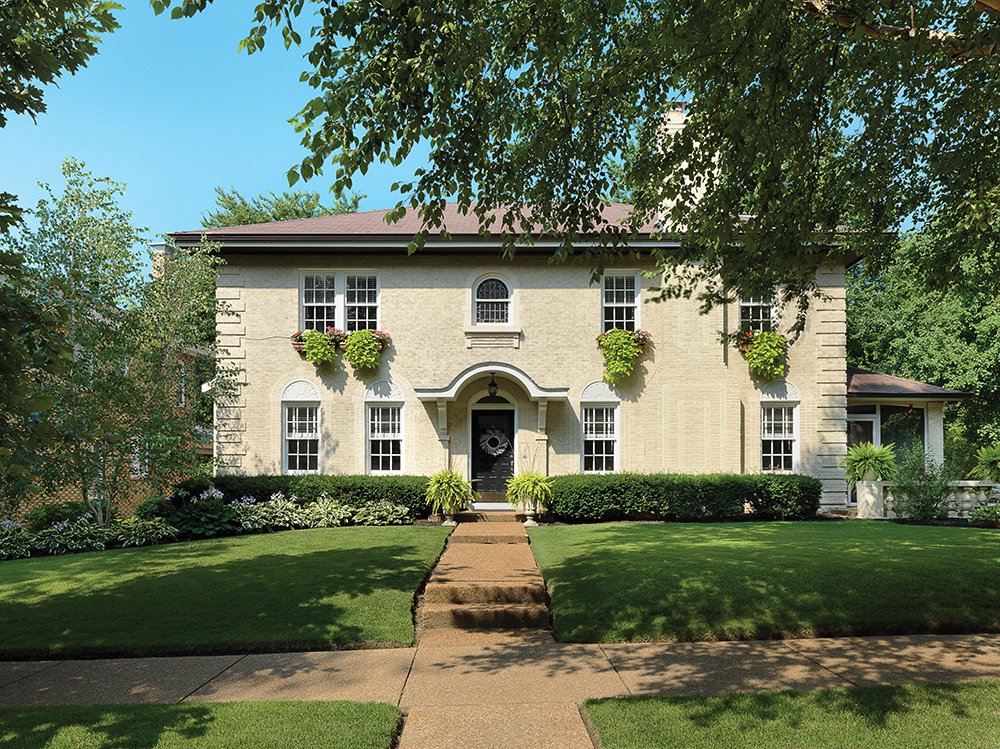 WHY WE CHOSE IT: Sitting regally on a lush corner in the beautiful University Hills neighborhood, this home, in the style of Italian Renaissance Revival, catches the eye with its impeccable landscaping, overflowing window boxes, and unique architectural details. Its painted façade highlights the intricate brickwork, and the rounded inlaid stained glass door and small rounded stained glass window above are examples of craftsmanship that can only be found in an older home. “I just fell in love with it,” says owner Cindy Cramer. “I love old architecture, but we’d never lived in an old home. This was our first move without kids, and we wanted to do something different.” When she and husband Jeff bought the house, 11 years ago, the side porch was open. Screening it in was one of their first projects, and they spend a great deal of time there. The Cramers also painted the carved sunbursts above the windows a lighter shade than the brick to make them pop. The garage is tucked under in the back of the house, and a lovely shade garden winds around behind the driveway, surrounded by mature trees. “It has all of the old charm,” Cindy says. 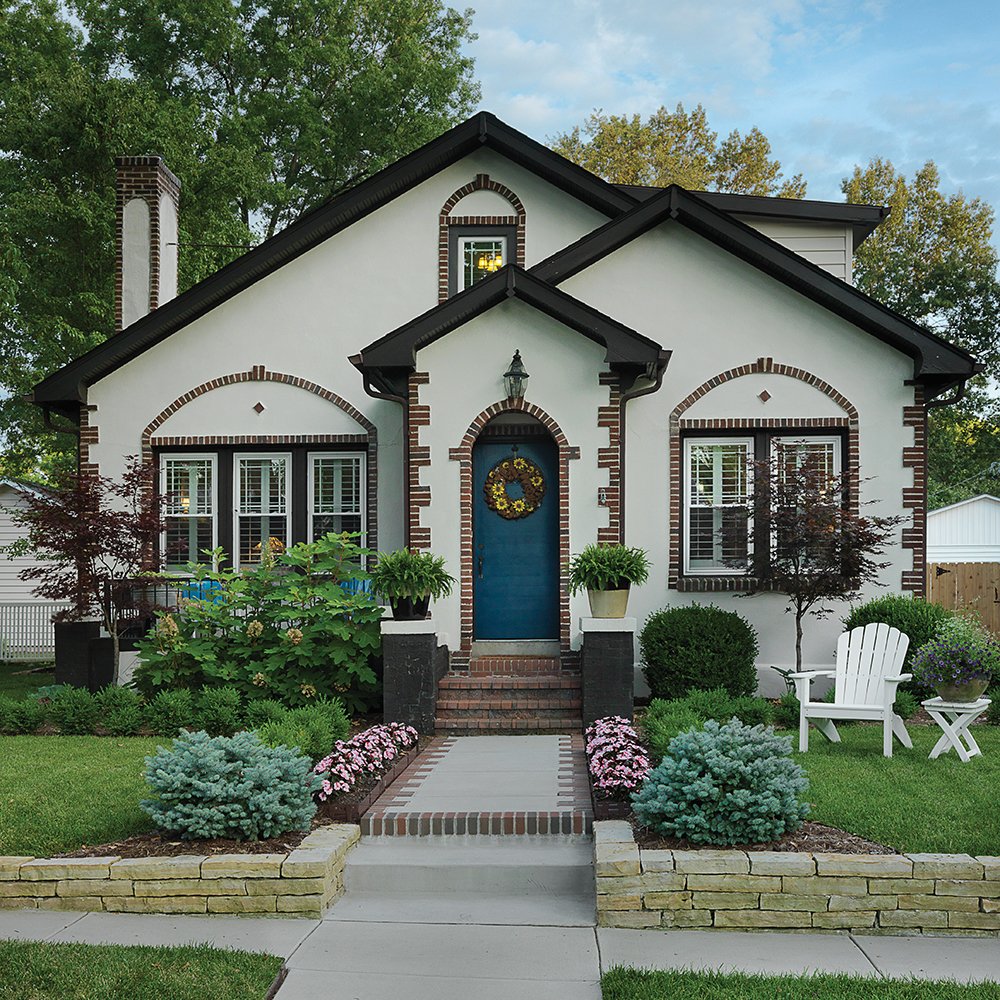 WHY WE CHOSE IT: This raised Spanish-style bungalow, built in 1929, is the very definition of curb appeal, proving that bigger isn’t necessarily better. The owner, a self-proclaimed farm kid and collector of primitive antiques, says the home’s interior modern farmhouse look won him over. The stucco-and-brick exterior was in good shape when he bought the house, in 2017, but the landscape was overgrown and messy, and he saw it as an opportunity: “I’ve always been a gardener in any home I’ve owned, and I’ve always done almost all of the work myself.” Here, he started from scratch, bulldozing the yard and giving the house the grand entrance it deserved. The brickwork frame on the newly poured concrete walk perfectly mirrors the surrounding entry. The cut-and-milled limestone retaining wall has an organic look. Bookending red Japanese maples bring the colors of the house into the garden. “Gardening, for me, is like an artist’s canvas,” he says. “I just stand back with a glass of wine and plan what I want it to look like. It hits me, and I just do it.” 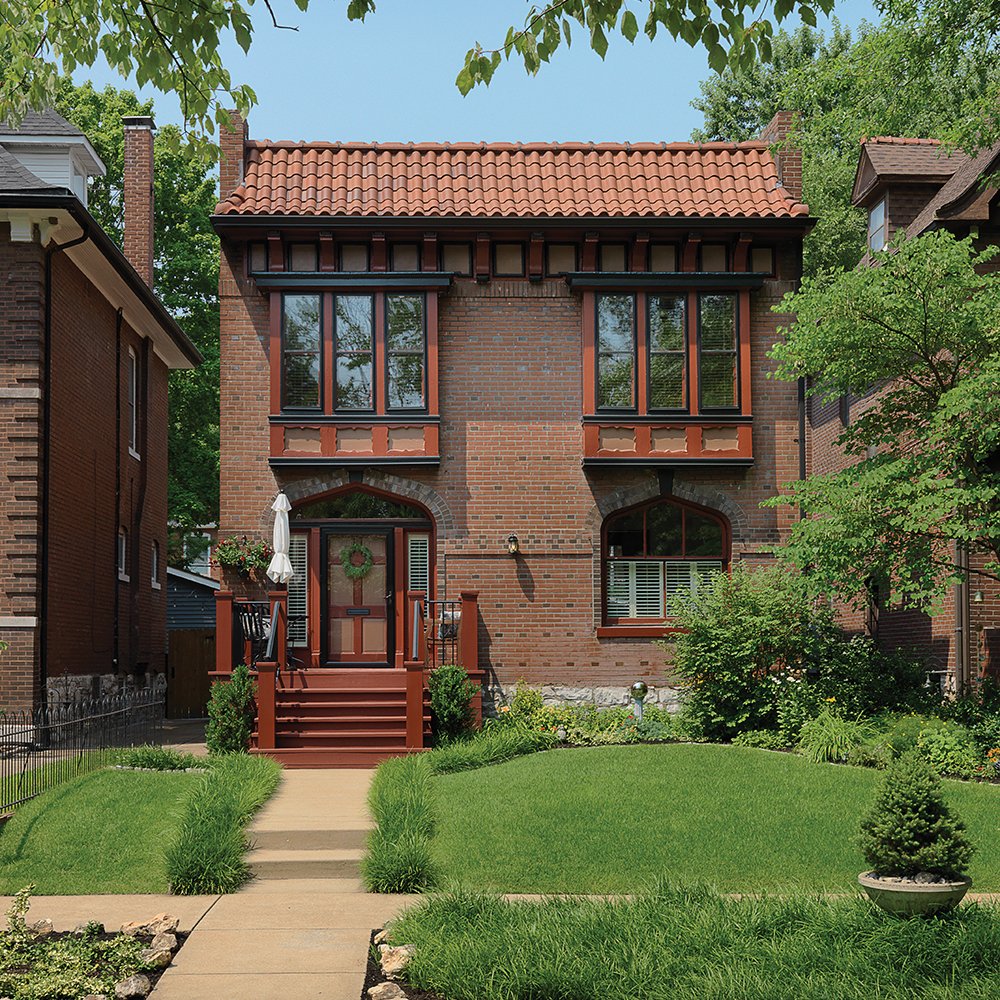 WHY WE CHOSE IT: This house, built in 1908, is one of the oldest homes in the neighborhood. Current owners Jaina and Paul Stus first laid eyes on it during an open house in 2001 and knew immediately that it was the house for them: The location, charm, and neighborhood were too good to pass up. The couple then embarked on a seven-year renovation, much of which they did themselves, with help from their parents. “We both came from families that were do-it-yourself-ers,” Jaina says. “We learned from them.” Throughout the renovation, they took great care to maintain the historical aspects of the home. When making changes to the exterior, they referred to a photograph from the 1930s that they received at closing. Over the years, they’ve had the house repainted twice, most recently last year when Paul rebuilt the front porch and added the wrought-iron railings. Initially the woodwork was white, but they came up with a color scheme that would better accentuate the house’s period charm. “It added tremendous appeal,” says Jaina. “There’s a lot of detail, and you couldn’t see any of that when it was painted white.” 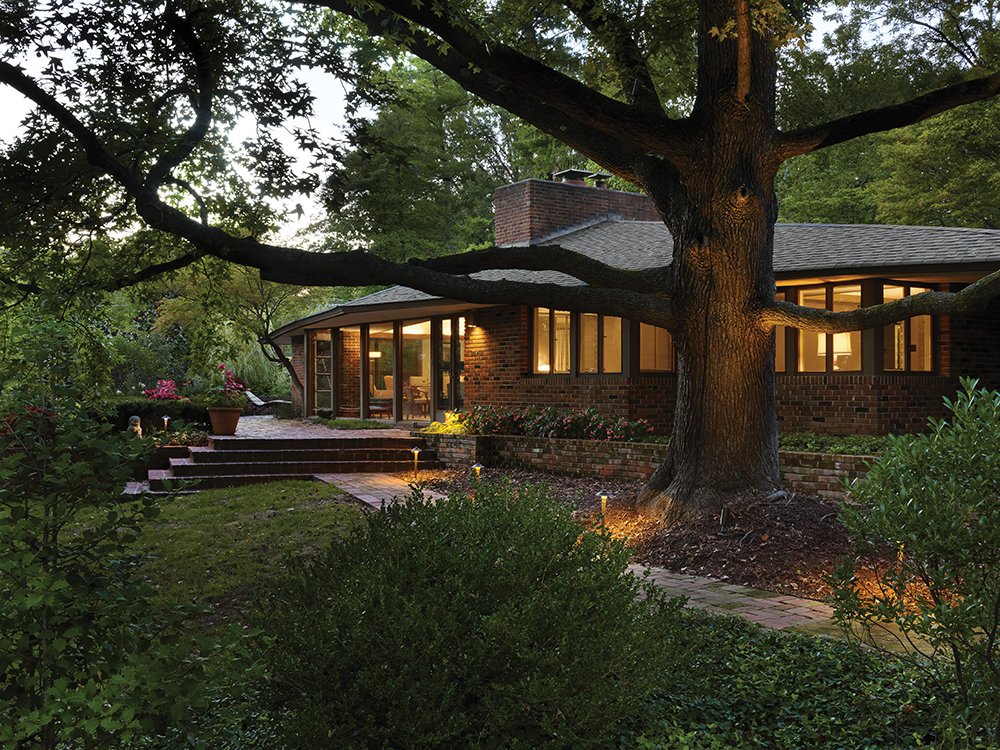 WHY WE CHOSE IT: This stunning 1950 Midcentury Modern ranch by William Bernoudy, a student of Frank Lloyd Wright, was the renowned architect’s own residence. Built on a wooded lot, it’s situated with the front facing away from the road. The structure is made of red brick, has a low, sloping roofline and blends in with its natural surroundings rather than intruding upon them—a hallmark of Midcentury design. The owner, Ted Wight, is only the home’s third occupant, the second being his parents, who purchased it directly from Bernoudy’s estate. “At the time my parents bought it, I wasn’t exactly a Midcentury enthusiast yet, but it really helped me appreciate good architecture in general,” he says. “Everything is designed so well, and everything has a purpose.” The main house is modest, but the property also includes a 500-square-foot detached guesthouse, separated by a brick patio and rock garden. Off to the side of the front windows, a small, rectangular “cocktail pool” offers a spot for a quick dip. Wight, who maintains the surrounding gardens himself, says he enjoys watching them change with the seasons and at various hours of the day. 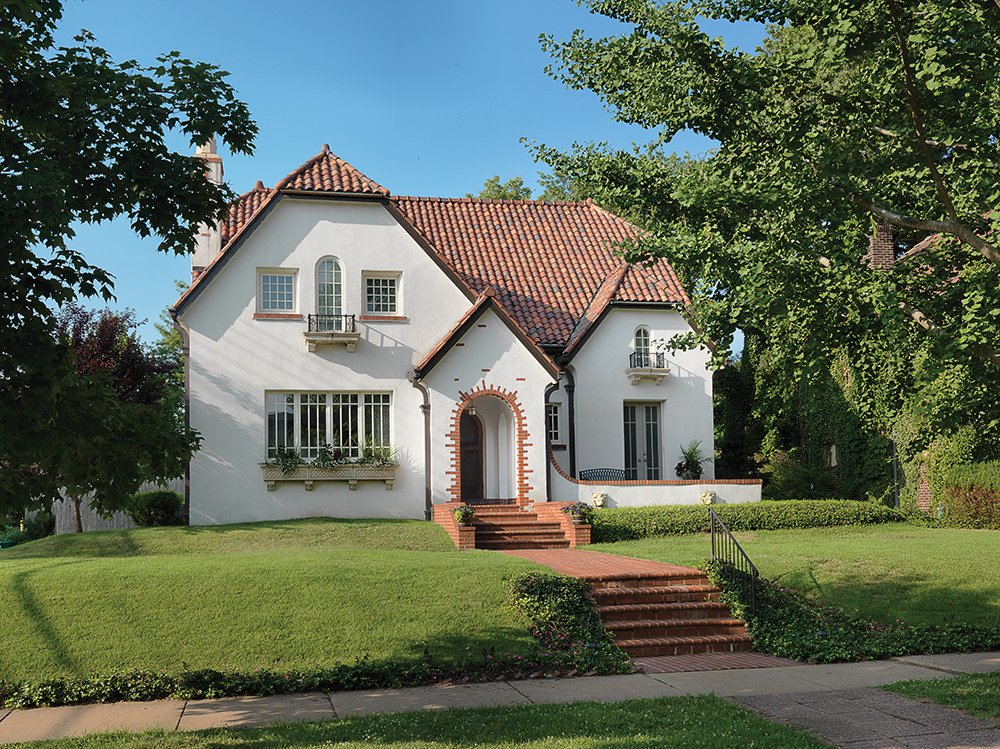 WHY WE CHOSE IT: This 1917 California Mission Revival house sits on a corner lot a short walk from the shops and restaurants near DeMun Park. Among its striking features are original stone window boxes, which are echoed inside the house in the stone mantelpiece. One of the current homeowners fell in love with the house nearly 30 years ago, when she was a student at Washington University. In 2003, when she and her husband were looking for a home for their growing family, they purchased it from a rehabber mid-renovation. The house had been taken down to the studs, so they were able to choose the tile, light fixtures, and other design elements. A master gardener, she’s chosen and planted every plant in the yard and window boxes. About 10 years ago, she started planting sunflowers in the side yard—a choice that proved popular with the neighbors. “I love where [the house] is situated, because when I’m out gardening, the neighbors all stop on their walks,” she says. “When we moved in, the garden was just dirt and a couple trees… I’ve poured my heart and soul into the yard.” 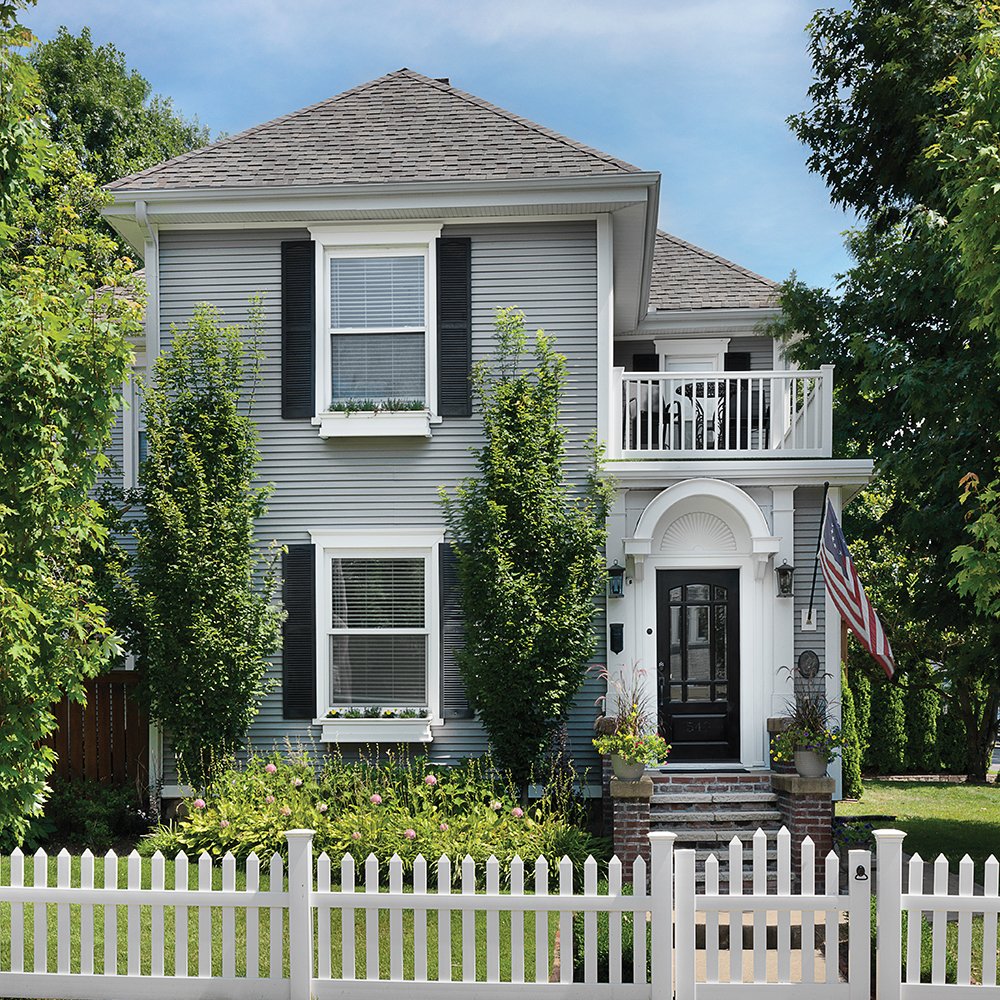 WHY WE CHOSE IT: Kelly and Donald Faulkner were about to sign a contract on a house a block away when they happened to notice a “Coming soon” sign on this 1906 Victorian. They immediately called their agent and moved in a month later. Among Kelly’s favorite aspects of the fully remodeled house are the original wood floors, the wainscoting and crown molding, and the large butler’s pantry. The house also features wonderful outdoor spaces, including a New Orleans–style courtyard off the living room, a covered patio in the backyard, and a second-story walkout balcony over the front door, added when a former owner, an architect, bumped out the front of the house to create a larger living room. The Faulkners also love the location. They’d been searching for a historic home—this one is on the National Register of Historic Places—in the area for 10 months. “We love the city living, but it’s still small-town,” says Kelly. “Within five minutes, you’re at Main Street or the Katy Trail. Everything is in walking distance.” 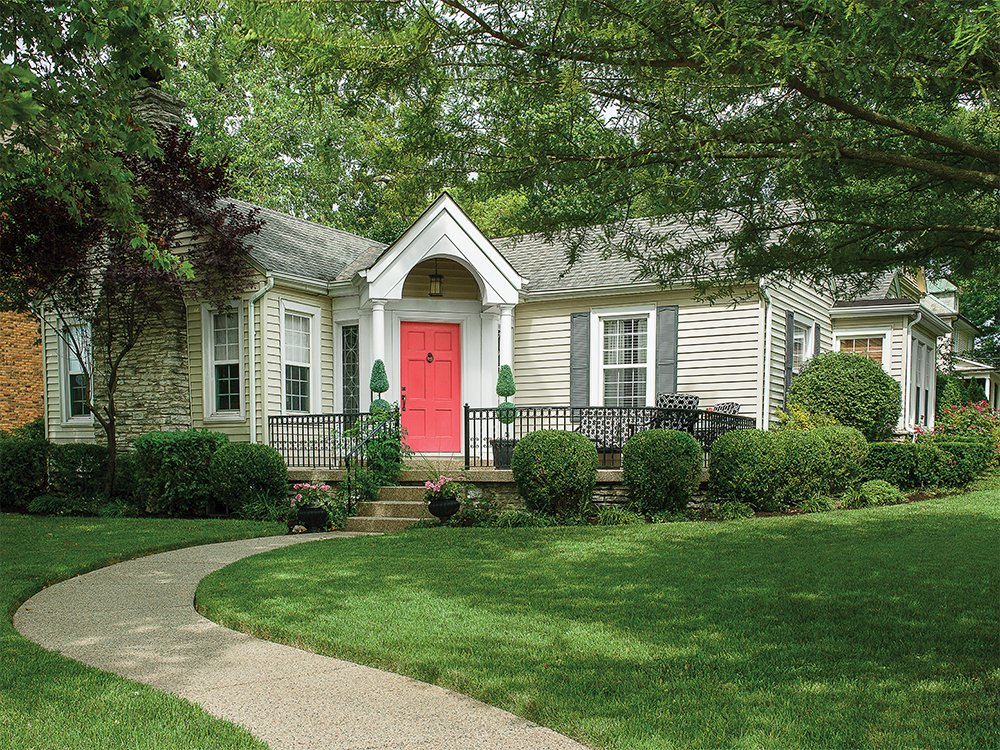 WHY WE CHOSE IT: This charming 1925 Colonial Revival house sits on a corner lot in the heart of downtown Kirkwood. Owners Susie and Rick Randall both work in real estate, and in 2006 they were looking to downsize to a smaller home in a walkable neighborhood. Their search led them to this house; they fell in love with the stone fireplace, plaster archways, and original doors with crystal knobs. Before moving in, they added a master bedroom and bathroom and updated the kitchen cabinets and countertops. They soon learned that many neighbors referred to the house as the “iris lady house” because the previous owner sold iris bulbs in the yard. The house was also known for its purple front door, which Susie later painted salmon. On pleasant days, Susie says, her favorite spot is the front porch. “We have a nice back porch with a table to eat at, but we’re always on the front porch. There’s so much energy, with people with strollers, people biking. It just makes you want to get out.” She also loves being close to restaurants, and her grandchildren love the home’s proximity to snow cone and ice cream shops. 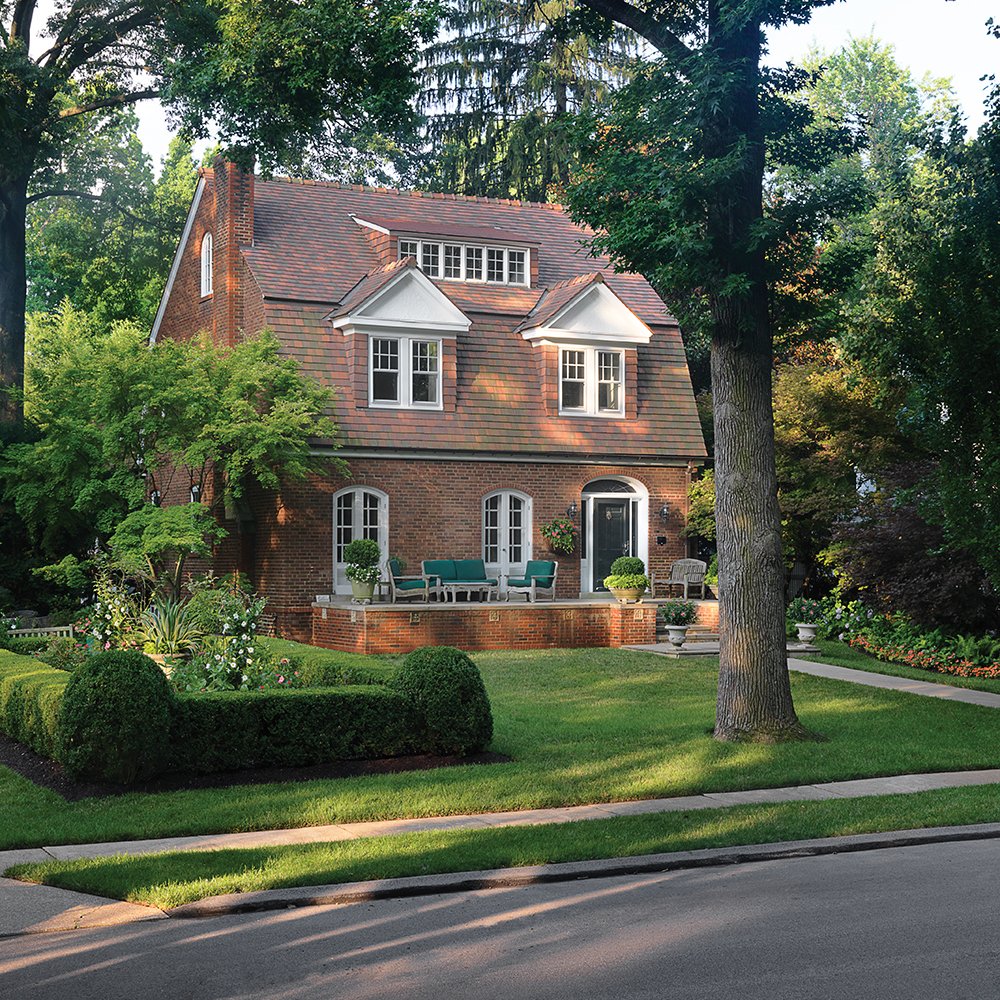 WHY WE CHOSE IT: Nancy and William Pedley have lived in this 1928 Dutch Colonial Revival since 1992. Nancy first noticed the house—with its arched doorways, red tile cross-gambrel roof, and spacious yard—when dropping one of her daughters off at a friend’s house. Although it wasn’t for sale, she soon learned that the owners were getting ready to downsize, and the two families eventually ended up swapping houses. Over the years, the Pedleys have added central air, remodeled the kitchen, redesigned the front terrace, and repaired the hail-damaged roof, but much of their attention has been focused on the yard, a passion they share: William is a landscape architect and Nancy is vice president of landscaping firm Kelce & Pedley Design. The front yard now features a formal rose garden to the east and a more free-flowing garden filled with hydrangeas, azaleas, ferns, and hostas, on the west. “I love many different plants, and some have their place in a less formal garden. I wanted to be able to have the best of both worlds,” says Nancy, who loves seeing “something green” from every window in the house. 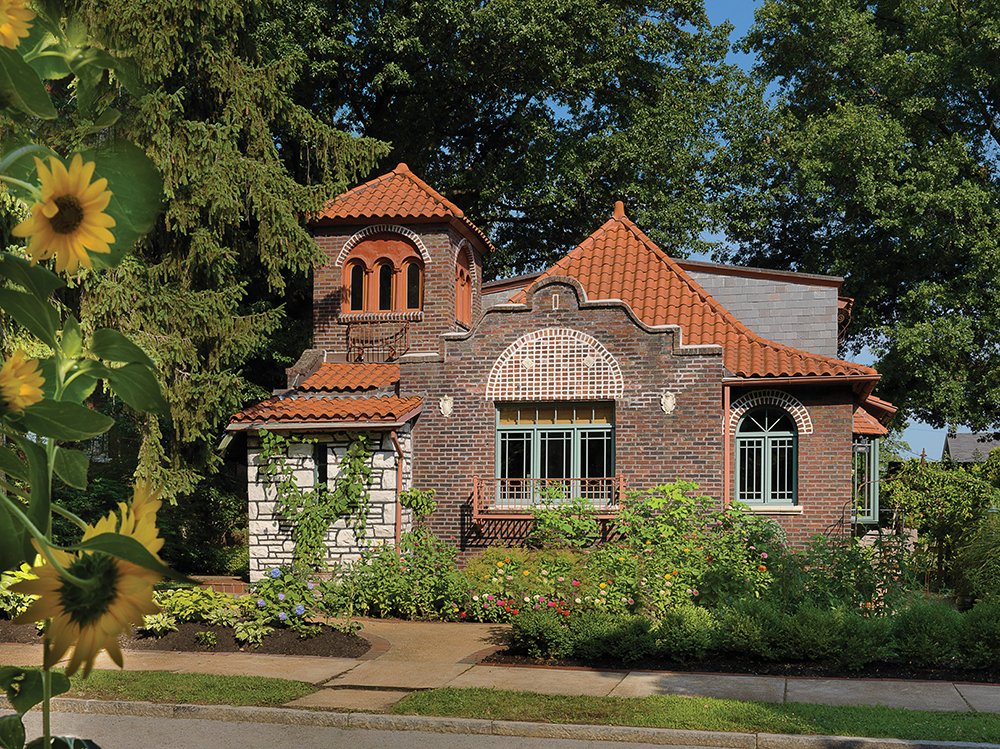 LANDSCAPE DESIGNER: The owner, a horticulturist

WHY WE CHOSE IT: Overlooking Carondelet Park, this Spanish-influenced house, completed in 1930, regularly turns the heads of passersby. Of its numerous exterior features, the owner jokes, “They added a little bit of everything.” A feast for the eyes, the house blends dark-red brick with light stone and terra cotta ornamentation, topped with a dramatically sloping red tile roof and bell tower. The metal-framed paned windows, painted a soft teal, were installed as part of a larger renovation carried out by previous owners about 10 years ago. White mortar on the arched brick above the windows adds visual interest. “I found it very charming and weird, and I like that,” says the owner. Her husband, a horticulturist, planted and maintains the yard, including the boxwood hedge, David Austin roses, and a small culinary garden, as well as various pollinator plants and summer annuals. Eventually, the couple hopes to turn the unused bell tower into a sitting and reading area. 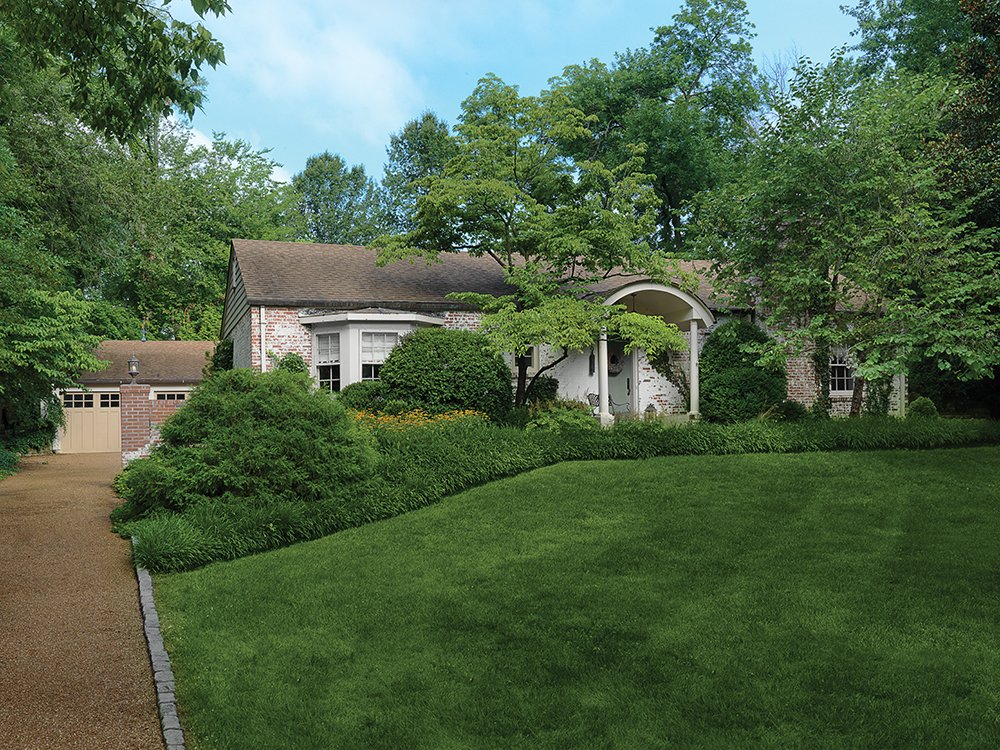 WHY WE CHOSE IT: Named for a pair of trees that once graced the front yard, Twin Oaks Cottage oozes charm, from the pentimento effect of its painted brick to the copper gutters and original paned windows. Its gardens come with a pedigree that few can claim: The landscape was designed by former owner Harriet Rodes Bakewell, who grew up on the grounds of the Missouri Botanical Garden, where her father served as its second director. “We’ve spent the last 20 years trying to bring the house back to Harriet Bakewell’s original plans,” says owner Susan Emerson. She and husband Larry bought the home in 1998. The original cottage, built in 1932, was less than 1,000 square feet. An extensive yet respectful addition to the back has more than doubled the size. The Emersons added the detached garage, and the rounded portico and supporting columns over the original front door. Their latest project: turning two small rectangular swimming pools in the backyard, installed by Bakewell, into reflecting water lily pools. Working in the gardens, chronicled by the Smithsonian Institution, has provided the couple with solace during this challenging year. 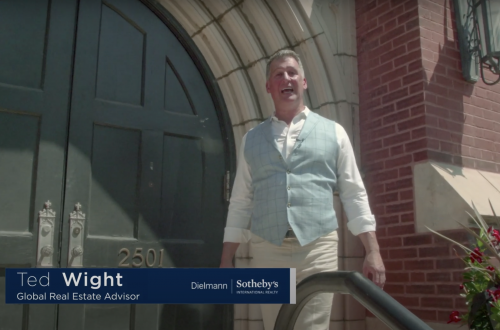