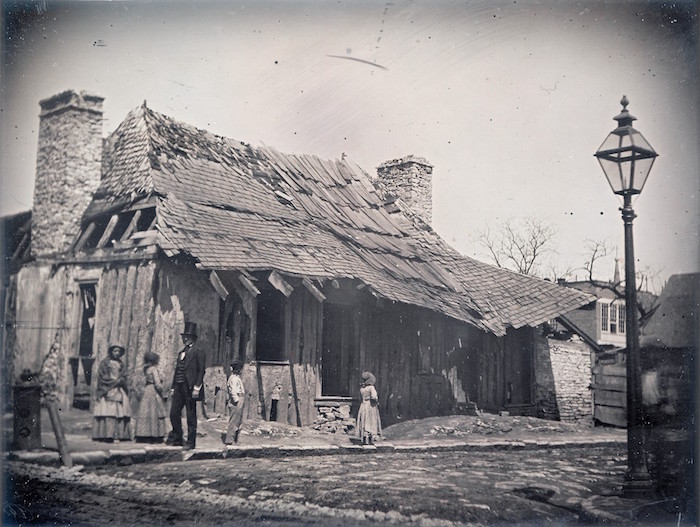 MCNAIR HOUSE (SPRUCE AND MAIN STREETS)
By the time Thomas Easterly photographed this crumbling French Creole home in 1865, it was already nearing its 100th birthday. Built in 1775, it later picked up the name McNair House in honor of its most famous resident: Missouri’s first governor, Alexander McNair.

The McNair House was built in a French colonial style called poteaux-sur-sole, which involved packing rocks, bricks, or earth between vertical wood posts. This construction is visible in Easterly’s image because most of the house’s plaster covering had fallen off long before. You can also see how the missing front porch and supporting columns left the overhanging roof to sag and how someone began covering the roof’s enormous holes with strips of scrap wood but gave up halfway through. The McNair House didn’t last much longer after this image was taken. 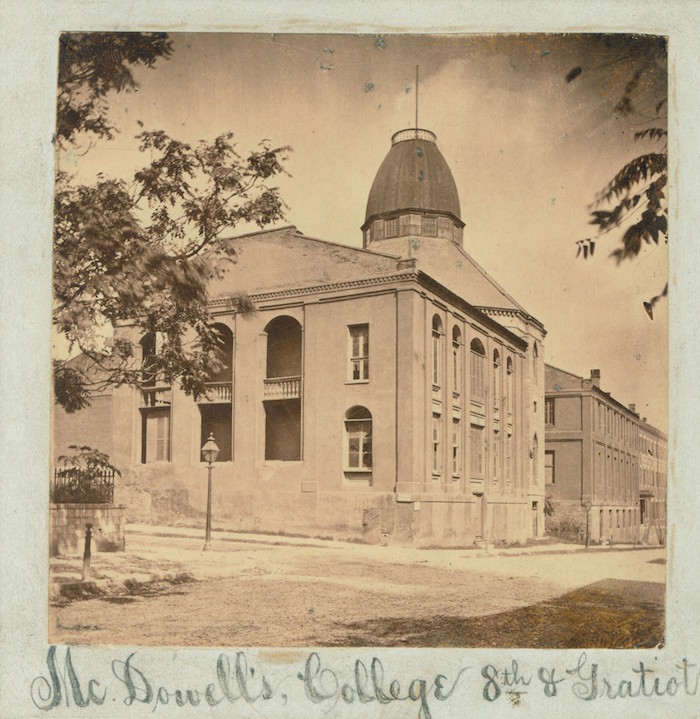 MCDOWELL MEDICAL COLLEGE/GRATIOT STREET PRISON (8TH AND GRATIOT STREETS)
Many buildings have a strange history, but few are interesting enough to have two. Dr. Joseph McDowell built McDowell Medical College, the first medical school west of the Mississippi River, in 1847. Rumors quickly spread of the eccentric doctor conducting strange experiments on bodies stolen from graveyards, leading McDowell to become a local villain. When he fled St. Louis, the Union army turned his college into Gratiot Street Prison. Thousands of Confederate prisoners were held within its gloomy, overcrowded walls.

The crumbling building sat abandoned for decades and was a well-known landmark to St. Louisans. Considered haunted, it was finally demolished in the 1880s. 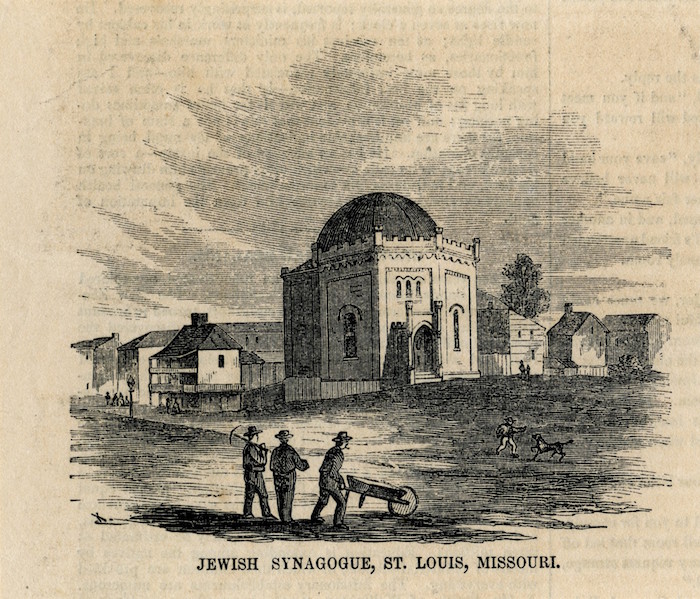 B’NAI EL SYNAGOGUE (6TH AND CERRE STREETS)
Nicknamed the Coffee Grinder due to its octagonal shape, the B’nai El Synagogue was erected in 1855 as the first permanent building associated with Judaism in St. Louis. B’nai El Congregation had formed three years prior when two smaller St. Louis congregations, B’nai Bith and Amoona El, joined together permanently. The new synagogue building had the appearance of a tiny fortress, with a thick courtyard wall and castle-like towers at its corners. Famed Jewish philanthropist Judah Touro, of Providence, Rhode Island, donated $5,000 for its construction.

B’nai El Congregation used the building until 1875. Thirty years later, it was leveled for commercial development. 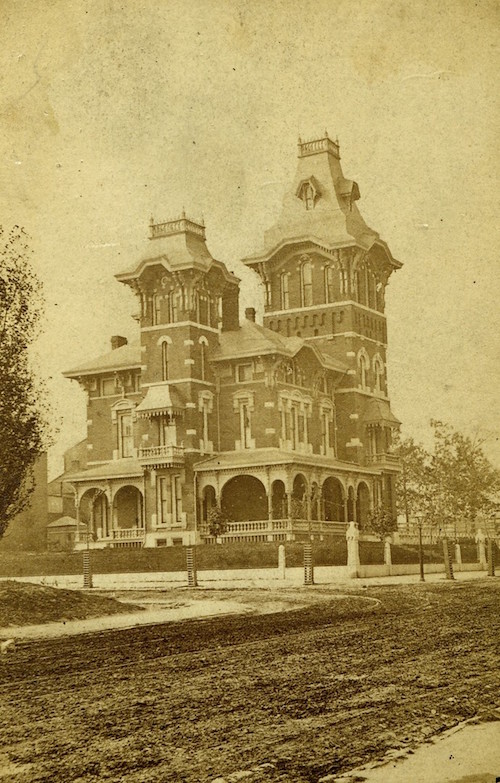 THE CRACKER CASTLE (CHOUTEAU AVENUE AND DILLON STREET)
In the late 1860s, Jonathan Pierce, a cracker manufacturer who made a fortune selling hardtack to the Union army during the Civil War, built a palace along Chouteau Avenue that couldn’t be missed. The five-story “Cracker Castle” cost $115,000 and had so many rooms that visitors frequently got lost in it. Bold in its Victorian flourishes, it was one of the largest of many elaborate homes built near Lafayette Park in the late 1800s.

The Cracker Castle suffered heavy damage in the 1896 cyclone that tore across the area, and its ruins were carted away soon afterward. 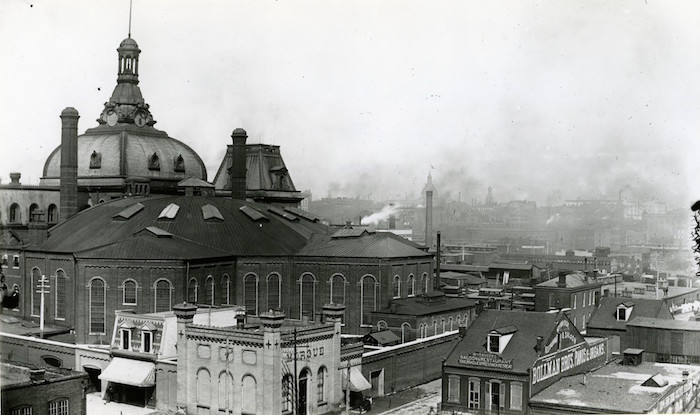 FOUR COURTS BUILDING (12TH AND CLARK STREETS)
The 1878 guidebook A Tour of St. Louis opens its section on the Four Courts Building with the words: “The stranger to the city, who desires to gain a knowledge of every phase of low life in St. Louis, with the least possible delay should visit the police courts.” Sightseers flocked to the building to tour the courtrooms, see the rogues’ gallery of criminals, and look in at the prisoners in the city jail. Additionally, some of St. Louis’s most morbid sights—the execution gallows and city morgue—could be found in the rear courtyard.

The Four Courts Building was demolished in 1927. The building now known as Mel Carnahan Courthouse went up in its place. 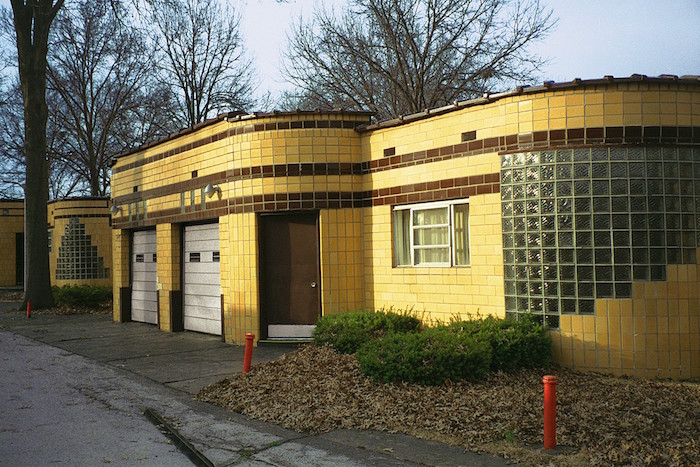 CORAL COURT MOTEL (7755 WATSON ROAD)
While the Coral Court’s slick, “built for speed” architecture made it a famous stop along St. Louis’s stretch of Route 66, so did its later reputation as a discrete meeting place where secrets remained safe, curtains stayed closed, and rooms were rented by the hour. The Coral Court Motel certainly saw its fair share of real scoundrels, including Carl Austin Hall, the fugitive convicted in the 1953 kidnapping and murder of Bobby Greenlease who spent two days hiding out in room 49A before being captured.

When Interstate 44 bypassed Route 66 in the 1960s, Coral Court began to decline steadily, finally closing its doors in 1993. Soon afterward, plans appeared to replace it with a suburban neighborhood. Preservationists tried to save the building and even managed to get it listed on the National Register of Historic Places, but ultimately the art deco motel was doomed. 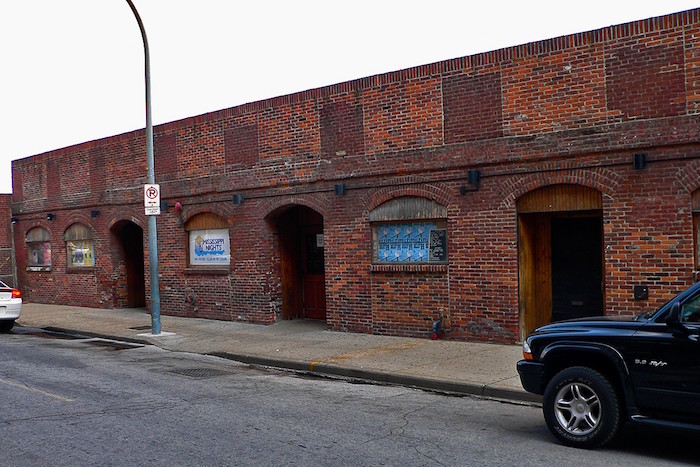 MISSISSIPPI NIGHTS (914 1ST STREET)
Mississippi Nights opened on Laclede’s Landing in 1979 as a country-western bar, but it soon evolved into the premier midsized music venue in St. Louis. It attracted local and national acts with an openness toward new genres of music. A wide array of musicians graced its stage, including acts as diverse as the Police, Joe Cocker, the Red Hot Chili Peppers, Lucinda Williams, and Nirvana.

The venue’s 2007 closing was grieved universally by St. Louis–area musicians, many of whom had played the Mississippi Nights stage at one point in their lives. The building was demolished as part of the Lumiere Place casino development.