The Coronado Hotel officially opened at 3701 Lindell Boulevard in 1925. It was designed by architect Preston Bradshaw, who went on to own and operate the hotel.

In 1934, Bradshaw opened a bar in the basement of the Coronado.

Preston Bradshaw has opened a picturesque spot in the basement of the Coronado, known as “The Coal Hole” . . . It’s entered via a short stairway (called a ladder by the mariners) and resembles the hold of a ship . . . With portholes in the bulkheads where the visitors can gaze out into an illuminated sea and witness fishies swimming around . . .

The Coal Hole had the atmosphere of an old English drinking tavern, with a deep arched ceiling, old mellow wood walls, quaint lanterns and a cozy fireplace. 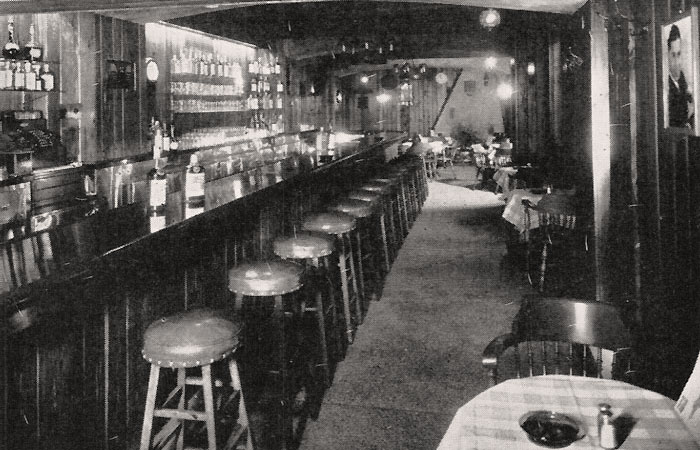 The Coal Hole’s glory years were from 1945 to 1961. A five minute walk away, it was a frequent destination for multitudes of St. Louis University students.

In July of 1964, St. Louis University bought the Coronado Hotel and converted it to a residence for its students. The Coal Hole was locked up and closed.

Sheldon “Shel” Waldman was born in Springfield, Missouri. He grew up in St. Louis and in his late teens entered the Navy, serving stateside as a cook and aircraft gunner in World War II.

After the war, Waldman operated several small businesses in the St. Louis area, including Shel’s Handbags on Washington Avenue, a wholesale business where he sold his shoe and handbag designs to local retailers.

In the 1960s, Waldman got his first taste of the hospitality industry as manager of the Playboy Club on Lindell. It was there he met his future wife, Johnnie Mae Flynn, one of the club’s original bunnies.

In 1964, Shel and Johnnie Waldman struck out on their own, opening the Stork Club at 4207 Lindell, adjacent to the Hotel Windsor. The St. Louis Stork Club had no relationship to the prestigious nightclub with the same name in New York City. At the St. Louis club, waitresses were dressed as babies and a lucky customer got to “change” the baby’s diaper.

You can be a Stork Club Baby if you are between the ages of 21 and 25, attractive, and like the glamour of night club surroundings. For interview see Johnnie at Stork Club, 4207 Lindell. 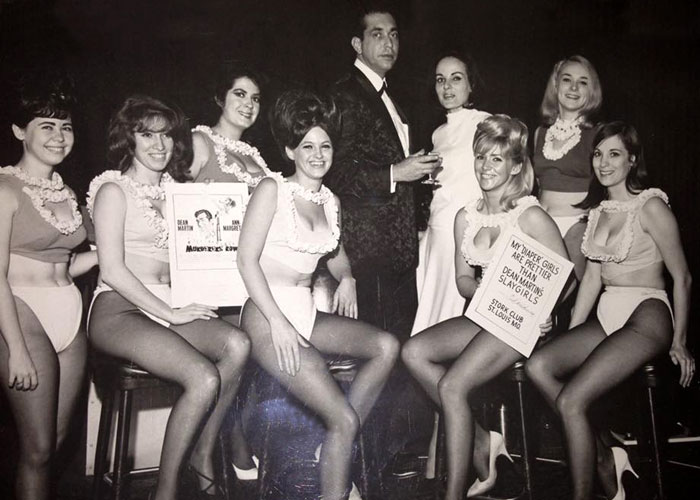 Shel and Johnnie Waldman with their waitress “babies”

You are about to become a proud “parent” . . . just as soon as the Stork presents you with an adorable (and delectable) mid-day delivery.

He’s quite a bird, you know; and just never seems to tire of creating divine concoctions and culinary masterpieces.

Your complete enjoyment is of the utmost importance to him; and therefore, would welcome any suggestion concerning the improvement of his service in any way whatsoever.

Thank you for visiting the Stork. He sincerely hopes that when and if the positions are reversed, the occasion will be an equally joyful (and healthy) one!

In the spring of 1969, the Stork Club left its spot adjacent to the Hotel Windsor and moved down the street to 4245 Lindell, in a building that had been previously occupied by the Chez Joie cocktail lounge. The club remained open until at least November of 1972, but by November of 1973, the Stork Club had closed its doors . . . and Shel and Johnnie Waldman had moved on to better things.

In 1966, the Siteman Organization opened St. Louis County’s tallest structure, the 23-story Park Tower Apartments building at 200 South Brentwood Boulevard, across from Shaw Park. In January of 1970, Shel and Johnnie Waldman opened a restaurant “200 feet below the top of the Park Tower Apartments.” They named their restaurant after a spot Shel had spent much of his youth – the Coal Hole in the Coronado Hotel. 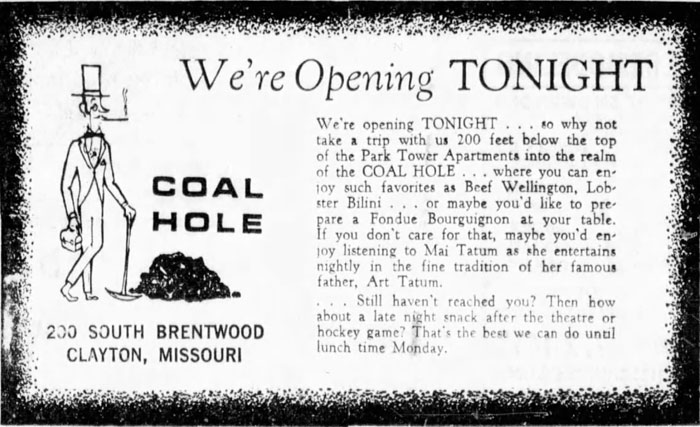 The Waldmans extended their homage to the restaurant’s décor, with wood shoring over the bar and in the entry, pieces of coal embedded into the walls, coal mining tools and antique gas lights. An intricate scene depicting a working mine decorated the wall behind the bar.

The décor was warm and comfortable, although a bit on the dark side. In later years, more color was added.

“When we first opened, everything was black and gray, but we brought in pastels and blues to bring an elegant coal mine touch,” explained Waldman.

The dining room seated 160 and the bar 40. Diners often requested a table by the window to view the sunset over Shaw Park.

The Coal Hole specialized in continental cuisine. The menus themselves had a European touch; those offered to women did not include prices. Many of the dinner entrees were prepared on the charcoal broiler. Fresh seafood, such as swordfish, sautéed scallops and lobster, was flown in daily. The restaurant was known for its fresh stone crab.

In addition to taking a cue from the shuttered bar in the Coronado Hotel, the Coal Hole also borrowed from the Waldmans’ Playboy and Stork Clubs. Its waitresses were young and attractive, some of them former St. Louis bunnies. The “Cole Hole girls” wore skimpy uniforms, although these were shed in 1986 in favor of long, chic dresses, designed by Johnnie Waldman. The restaurant also used attractive models as parking valets at lunch.

Shel and Johnnie Waldman consistently provided the type of hospitality for their customers that made them want to return. The majority of the clientele were regulars and were greeted by name as they enter. Individuals seemed to know one another. Hugs and handshakes could be seen almost every time someone new came in the door. 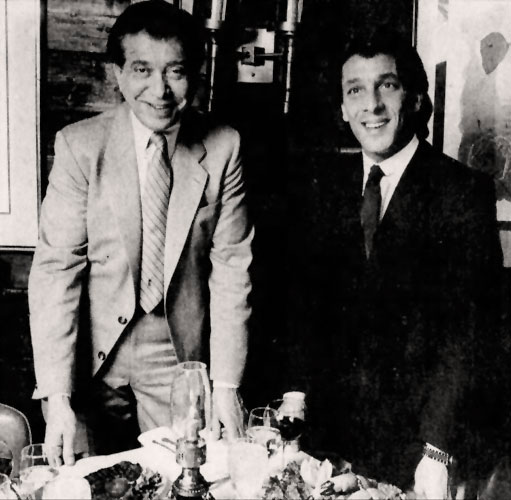 In 1980, the Waldmans opened Daddy’s, a restaurant at 1013 South Brentwood, on the west side of Westroads Mall. Its slogan was, “A tribute to Daddy, a treat for Mother.”

In the early 1980s, Shel Waldman and a group of investors remodeled the Ramada Inn Clayton into a luxury hotel called the Daniele. He later co-owned the Daniele with his sister, Edith Wolff. Beginning in the early 1990s, Shel and Johnnie Waldman operated the hotel. The hotel staff included many loyal employees who had followed the Waldmans from their earlier businesses.

In 1988, Jean Claude and Rachel Guillossou and their brother-in-law and sister-in-law, Marcel and Monique Keravel, bought the Coal Hole from Johnnie and Shel Waldman. “We will manage if for a few weeks,” said Guillossou, whose family owned L’Auberge Bretonne and Café de France. “Later, we will shut it down and remodel it to be called L’Auberge Bretonne.”

Shel Waldman, who was once called the “Hugh Hefner of Clayton,” died on April 28, 2004 at the age of 77. He had continued to operate the Daniele until shortly before his death. 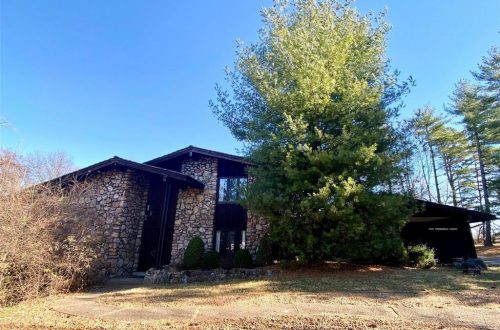