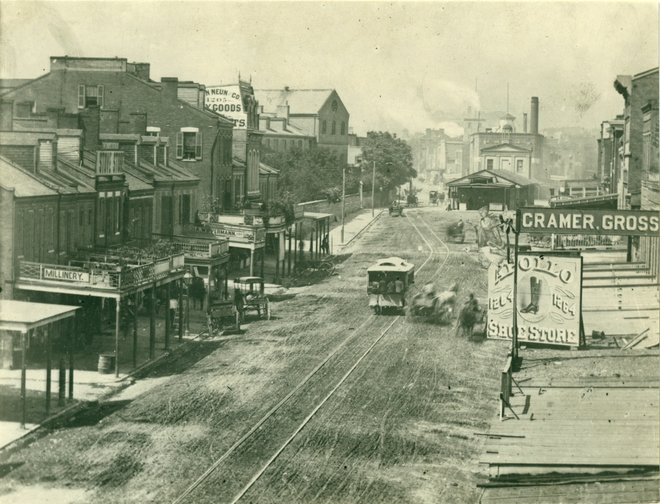 First with the supermarket, and now with online grocery shopping, the way we buy food has changed dramatically in just a few decades. But in the 19th century, grocery shopping in St. Louis centered around large markets (the first to be documented stood at the corner of Levee and Market) and shopping days were Wednesdays and Saturdays, by ordinance.

We know Soulard Market as a historic remnant of those days, but there were many markets just like it scattered throughout St. Louis. Here are some of Soulard Market’s former competitors—and one market that could have been. (Note: By no means is this an exhaustive list.)

French Market
Standing just north of the more famous Soulard Market, this one took its name from Frenchtown, the area that opened for development south of the original city of St. Louis in the early 19th century. Ironically, the neighborhood was originally home to many German immigrants, including Adolphus Busch and Eberhard Anheuser. The founding of the second Roman Catholic parish, St. Mary of Victories, a German language national church, also attests to this.

French Market sat in the middle of Broadway just south of Chouteau Avenue. Originally known as South Market, it was created by city ordinance on March 18, 1829, and 332 shares of stock were sold to investors at $25 a share to pay for construction of the market building. A North Market was created as well.

Not surprisingly, French Market suffered economically from the proximity of the more famous and still extant Soulard Market. As the immigrant neighborhood industrialized around the turn of the century, French Market began a slow decline. Newspaper articles from around 1910 chronicle attempts by French Market businessmen, who’d long replaced farmers in the market, to present the area as a clothing and upscale merchandise destination.

The opening of the Municipal Free Bridge (now the MacArthur) raised hopes that were soon dashed. Later newspaper articles recount stories of the last tenants being evicted for squatting in old market stalls, and the Stock Market Crash of 1929 hammered the final nail into the coffin. Today the area is a mixture of parking lots, old warehouses and train viaducts. A short stretch of street named “French Market Court” is the old market’s only visible remnant.

Lucas Market
There is a reason why Tucker Boulevard is so wide in between Olive and Chestnut streets, and it’s not because of the famous bond issue from the early 20th century that widened many of the major arties of St. Louis. This was the location of the Lucas Market, founded in 1845, and the street was clogged with delivery wagons and shoppers until the market’s dissolution in 1882. (As strange as it might sound to have a market in the middle of a major street, in fact it is quite common around even America; Baltimore, Maryland still has two active markets of the same configuration: Broadway and Cross Street markets.) 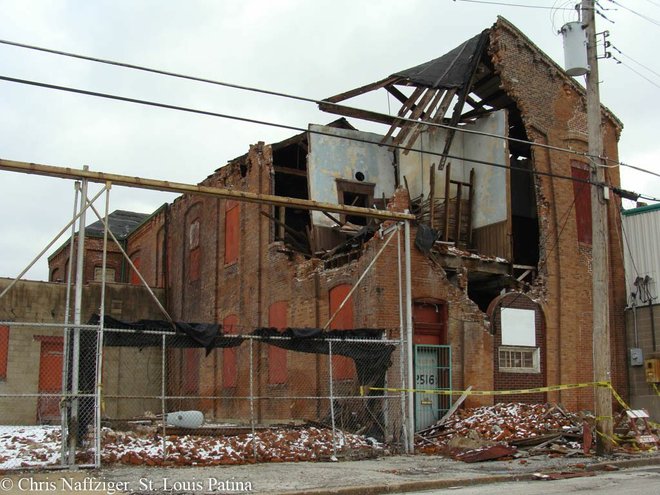 Reservoir Market
One of the fastest forgotten old St. Louis markets was Reservoir Market, which took its name from one of the first reservoirs built for the city’s famous water system. Located in what was then in the northwestern fringes of settlement, the reservoir was already out of use and in ruins when Compton and Dry captured it in 1875, but the market was located just across the street. The original portion of the building was constructed in 1865, just after the Civil War when the area was no longer in the middle of the defensive fortifications that surrounded the city. An addition was built in 1883, probably after the original market owners put the market up for auction.

Newspaper articles show the market still in operation in 1923. Its presence in German language newspapers also shows that it was a meeting place for immigrants who were members of various civic societies. And fire insurance maps reveal that market was used later as the parish school for the nearby Sacred Heart Roman Catholic Church, which was just a couple of blocks north. Sadly, the church was destroyed decades ago, and the Reservoir Market building suffered damage and was eventually demolished. The successor parish school building, on St. Louis Avenue, is now the Griot Museum of Black History.

Mound Market
Established as the fourth market in the city in 1843, Mound Market was located near the Grange de Terre, the largest of the Native American mounds that once lined the bluffs on the Missouri side of the Mississippi River. Its site is now Broadway and Howard Street, and the market exists only in maps and in Compton and Dry’s 1875 photograph. Newspaper articles three years later reveal that the market was the center of temperance and political party meetings. 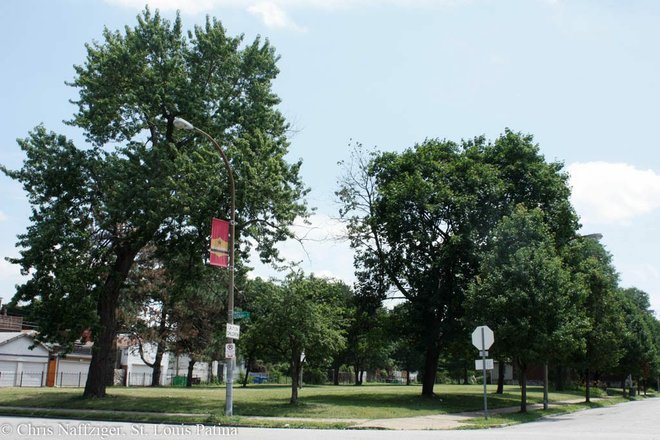 Carnegie Park
On the eastern half of the intersection of Utah and Indiana are two long pieces of open land known as Carnegie Park. I’d long just assumed this small two-part park was the result of demolition sometime in the late 20th century, but that is not in fact the case. Around 1900, these parcels were the site of a proposed market, but due to the opposition of nearby property owners, the plans were scrapped. Following the passage of a city ordinance in 1899, the land was converted into a park in 1904. One can only imagine the difference a bustling marketplace might have made in the history and character of Cherokee Street.