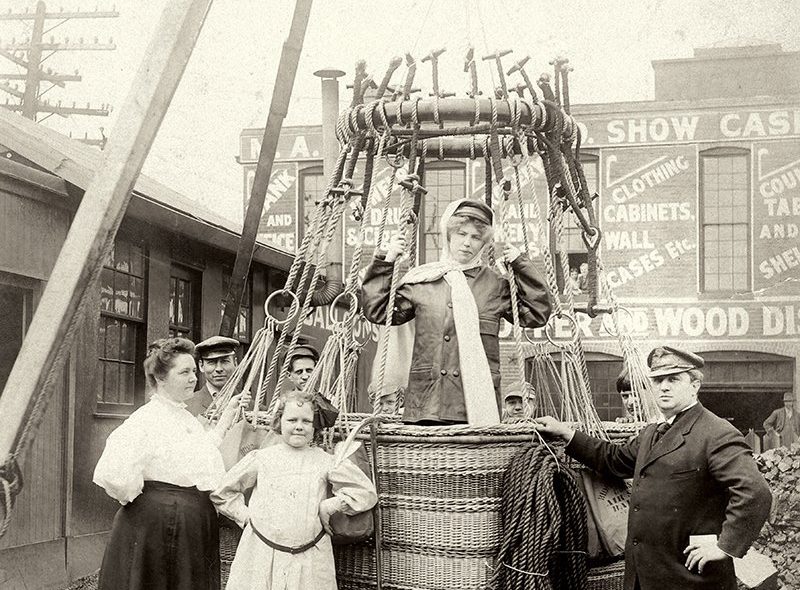 In his obit, Morris Heimann was described as a “pioneer balloonist.” He thought he loved fast cars, till he witnessed a balloon ascension at the World’s Fair; he immediately had one made in New York, naming it after Melba, his daughter. Heimann eventually converted part of his fixtures business into a hot-air balloon and airship factory, advertising balloons at his Washington Avenue showroom. He often took Melba on long trips by air and even tried to go grocery shopping in the balloon. “I think if balloonists would spend some of their money with the farmers, there wouldn’t be so much opposition to the sport out in the country,” he told the St. Louis Post-Dispatch. His most famous flight came in 1909, when he and fellow aeronaut John Berry were unexpectedly caught in a storm. After nearly an hour, Berry cut ropes, converting the balloon into a parachute. They plunged, then gently bobbed down, landing in Rock Hill, where they were assisted by—wait for it—a group of farmers. Heimann, in his enthusiasm to thank them, bumbled from the basket, tripped, and sustained his only injury of that death-defying trip: a sprained ankle.